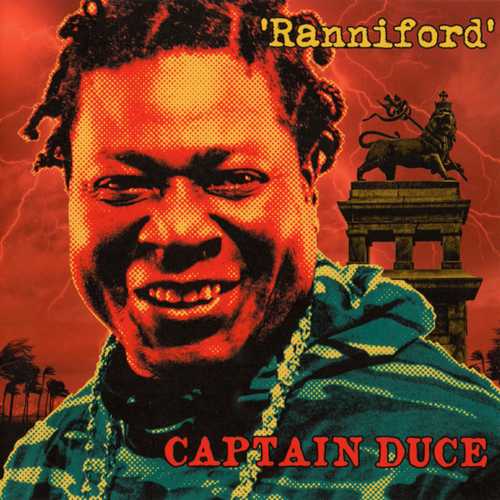 Sometimes it takes an artist a long time to get the opportunity to record a full-length studio album if he/she manages to achieve this at all. Captain Duce is such an artist. It was after his migrating to Manchester UK that he met Beres Simpson aka Prince Hammer who introduced him to veteran producer Roy Anthony Cousins (of The Royals) for whom he recorded the tune When Puss Gone – featured on the 2015 compilation CD Flowers In The Desert. And now, seven years after that release, there’s finally Captain Duce’s debut CD called Ranniford – or Ranniford-Bird Bush as printed on the disc.

Most likely most readers of this review have never heard of Captain Duce (real name David Hemmings), so let’s do a brief introduction of the man from Cockburn Pen, Kingston 11. He grew up across the road from Daddy U Roy Sound System, King Stur Gav, at the corner of Olympic Way and Cling Cling Avenue. He attended Cockburn Pen All Age School and Penwood Secondary, both located in the Kingston 11 area, and grew up under the watchful eyes of his neighbours, Devon Russell, Lloyd Robinson, Cedric Myton, Prince Lincoln Thompson, and Lukie D’s mother, Nina Soul. Captain Duce’s first sound system work was on Shalimar Sound System before he graduated to King Jammy’s High Power with proper teaching from Admiral Bailey and Josey Wales. Admiral Bailey then took him to King Jammy’s and Uncle T, Jammy’s brother, to record him but he preferred to work with King Tubby. Captain Duce’s first single, Mr. Cobra, was recorded at Black Scorpio Studio and released in Jamaica on the Glamma label. It was followed by Dappa Don on Richard Bell’s Star Trail imprint and The Wake on the Wolf label.

Fast forward to his debut CD, for which Roy Cousins dug up and dusted off riddims from the early 1990s. These are laid by the Forces Of Music in Kingston, Jamaica, and were never used before. And thus, this collection of tunes doesn’t feature – as one might expect – Tamoki-Wambesi’s often well-known reggae riddims, but backdrops that were in fashion during the time of their recordings. If you listen to Captain Duce’s single Dappa Don you can imagine why this deejay’s style fits the riddims Roy Cousins has picked very well. Although being an original 2022 CD, this dancehall release is best labelled as ‘throwback’, ‘vintage’, and ‘old-skool’. There is absolutely nothing wrong with that, especially when you’re treated to such a good album like this one. It’s not the opener Baby Baby, but it’s Dance Hall – coming on a familiar sounding dancehall riddim – that does a fine job in setting the course for what is to follow. Man Problem and Rude Boy are also very entertaining tracks, and so is Oh Lord with its sax overdubs. The musical backdrop is reminiscent of the kinda riddims produced by Davy Kelly in the ’90s. Bless Up is underpinned by a nice version of Gregory Isaacs’ Storm riddim and belongs just like the conscious I Am Willing to the album’s best tracks and so is It’s A Shame. Perhaps the only drawback you could point to is the fact that some of the tracks like for example the love songs Baby Baby, Sweet Sugar Dumpling, and Miss Beautiful (all written by Prince Hammer) need several listenings before you start to appreciate them.

The music definitely belongs to an era that has long gone but compared with current day’s dancehall music it certainly ain’t a punishment to listen to this Captain Duce album.

Conclusion It certainly ain't a punishment to listen to this Captain Duce album.