Jimmy London – It Ain’t Easy Living In The Ghetto 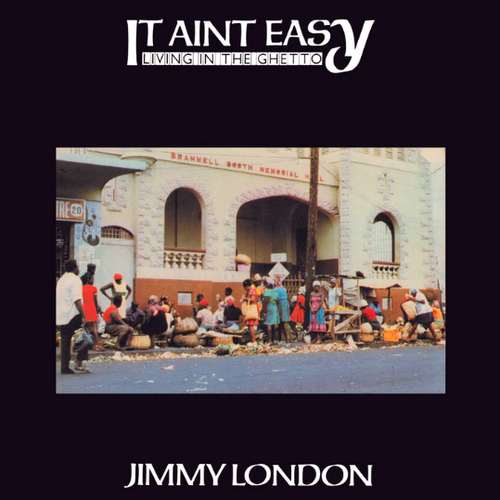 Jimmy London, born in 1949 as Trevor Shaw, is actually a relatively unknown and unsung singer, although his career started in the mid-1960s. He had his first hit success as a member of the duo The Inspirations in 1968 with the song Tighten Up, credited to The Untouchables in the UK. After this Lee Perry production, they switched to Joe Gibbs, but due to lack of success, the duo went their separate ways. In 1971 Jimmy (in collaboration with Clive Chin) scored with the Simon and Garfunkel cover Bridge Over Troubled Water. An album of pop covers followed within a year, after which Jimmy’s career really took off. In 1978 the album Welcome To My World was recorded with producer Phil Pratt, followed by It Ain’t Easy Living In The Ghetto with the same producer in 1980. He has continued to record and tour, to this day. Given his choice of repertoire, he has never been taken completely seriously by the inveterate roots reggae community, although his vocal qualities are indisputable.

Burning Sounds has reissued Jimmy’s 1980 album on 180-gram vinyl, with sleeve notes by J.R. Gonne. The title of this album may mislead the listener, you would assume that this album is filled with roots reggae, but the opposite is true. Except for the title track, and perhaps Moving On, Jimmy limits himself thematically to the affairs of the heart, which there is nothing wrong with by the way! The usual experienced session musicians of the time were hired to play the backing tracks: Sly & Robbie, the Barrett brothers, Ansel Collins, Ranchie McLean, Dougie Bryan, and a horn section consisting of Tommy McCook, Deadly Headly, and Don D Junior. Recording took place in the Channel One studios, with Ernest Hookim and Ossie Hibbert at the controls.

After playing the LP repeatedly, two songs immediately stand out, of course the strong, socially engaged title track and Moving On, the latter is perhaps his most popular tune for producer Phil Pratt. As expected, we find several cover tunes here. First up is a worthy rendition of Rock And Roll Lullaby, the 1972 released hit single by B.J. Thomas. This is followed by Jimmy Say Hello , his languid version of Just Tell Her Jim Said Hello originally sung by Elvis Presley. Also not bad is his version of Got To Change Your Ways written by Peter Tosh and performed by Johnny Nash in 1968. Peggy My Love, his version of the 1955 US pop hit Eddy My Love by The Teen Queens, is very tear-jerking, and thus aptly approaches the original. The closing tune is Loving You, and if I’m not mistaken I hear the riddim of Come On Little Girl by The Melodians here.