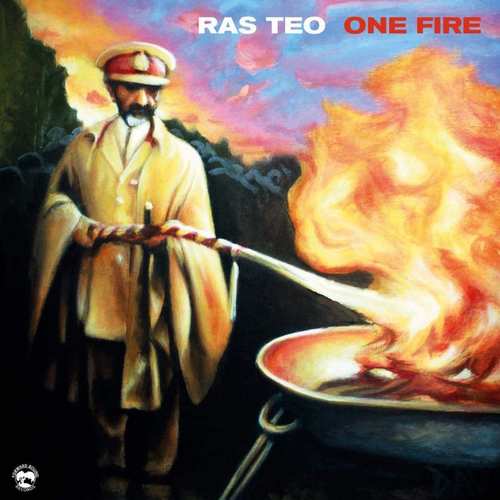 Although his name doesn’t pop up amongst those of the widely acknowledged roots reggae artists, prolific Swedish-born artist Ras Teo (Teo Hartoonian) aka Jah Menelik is one of those artists who definitely shouldn’t be overlooked. Over the last couple of years, he has released some really good works which included several noteworthy singles and the highly acclaimed albums Ten Thousand Lions, done in collaboration with A-Lone Productions’ Roberto Sánchez, and the vocal and dub Showcase LP Celestial Rockers, produced by David “Jah D” Goldfine of Zion I Kings.

His latest project, One Fire, is another release that simply has to be added to the collection of any fan of deep roots reggae. For the tracks featured on this 7-track EP, Ras Teo again joined forces with Roberto Sánchez and David “Jah D” Goldfine. Furthermore, on board are Zion I Kings’ luminaries Andrew “Moon” Bain and Tippy I, Okiel McIntyre (trumpet, trombone), Zoe Brown (flute), and on the last track, 1000 Miles, Phillip A. Peterson (cello), Jenny Rose Wilson (violin), Humbl Sohl (piano), and Klyve Crieffe (backing vocals).

The material on this set is both vocally and dubwise. From the first track, Must Be, up to the last one, 1000 Miles, this EP has real consistent energy and is about as delightfully straight-forward as it gets. Backed by riddims laid by Zion I Kings’ talented multi-instrumentalists, Ras Teo’s vocal glides expertly over infectious, warm, and melodic modern reggae backdrops. Being a master wordsmith, it’s also worthwhile listening to the lyrics of the four vocal cuts. With the opener, Must Be, Ras Teo presents a song that is immediately absorbable. Then there’s the title track, One Fire, which is just a really well-done piece. Also well worth your listening time is A Home, which registers highly from a purely sonic point of view. Definitely one of the finest tracks on the project. The final full vocal effort, 1000 Miles, is a downright stellar effort that features – for reggae music – some unusual instruments. It, however, works very well and gives this piece a somewhat mystic feel.

Anyone who hasn’t looked in on what Ras Teo has been up to so far is really missing out on something quite special. So take care of that right now!