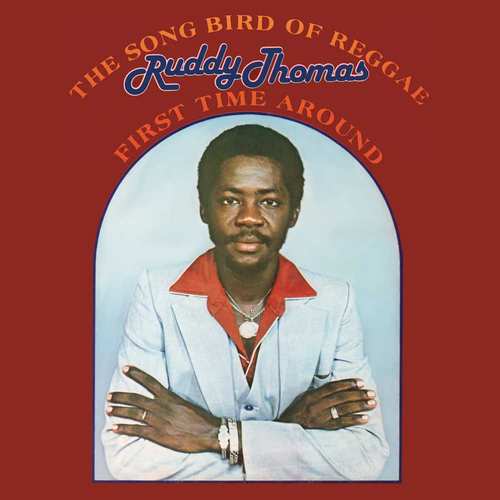 This was the debut album from one of Jamaica’s greatest hit makers and features many hits from the late ’70s. Ruddy’s early recordings were for Joe Gibbs out of Kingston. Three of his most popular recordings, Every Day Is Just A Holiday, Let’s Make A Baby, and Loving Pauper, are included on his first LP First Time Around. Cherry Red Records have now at long last been able to re-issue the debut album on CD with all the original tracks along with other Rudy Thomas recordings for Joe Gibbs and the very best of Lovers Rock recordings of which we take a look at a selection.

DISC ONE: FIRST TIME AROUND

1: THAT’S WHAT FRIENDS ARE FOR. The recording best remembered of this song is probably by Dionne Warwick. This comes with a stylish instrumental opening and is followed by the cool vocal from Ruddy Thomas. He is helped out by a female chorus most of the time throughout and we end up with a version as classy as the aforementioned original recording. What a way to start this disc and the original album. 2: TICKET TO RIDE. You’ve guessed it, this is the Lennon/McCartney song given the Reggae treatment. A heavy rhythm track and some fine percussion work mid-way, a good version of a fine song. 3: POORER SIDE OF TOWN. A mid-tempo slice of classic Reggae with a catchy rhythm track. Top-notch vocal once again from Ruddy, and this time he is on his own most of the 3min 37secs recording. 4: LOVING PAUPER. This track has been recorded by several other Jamaican artists and is a classic song. Nothing complicated about the rhythm track that has a vocal chorus in front at various times. For the record, as mentioned Gregory Isaacs, Freddie McGregor, Pat Kelly, and Dobby Dobson have all recorded the song. 5: SHAKE YOUR BODY DOWN TO THE GROUND. Recorded by The Jacksons this Reggae version takes nothing from the above recording and is equally a classic sound. This song lends itself well to this genre and Ruddy does it proud with a soulful vocal and Michael Jackson-style chants. 6: LITTLE JEANNIE. Originally co-written and recorded by Elton John it is another pop song that lends itself well to the soulful Reggae version performed in Ruddy’s usual classic style. 7: GO ON aka GONE. This track is slightly heavier on the rhythm track and has a chorus helping out at various times. Ruddy uses all his vocal talents on this and we end up with a toe-tapping, 4mins 15secs of Jamaican Lover’s Reggae at its best. 8: LET ME KNOW IT. A swiftly-moving sound with more of the same soulful tones from Ruddy. The rhythm track comes straight, with no percussion in sight. The sound is not unlike that of many ’70s Soul groups, not a bad thing. Janet Jackson also recorded the song. 9: SAD EYES. This is again an authentic Reggae sound and timeless. Comes with a pounding drum sound on the backing track along with a female chorus. Soulful Reggae does not come better than this. 10: SOMEONE TO LOVE. Again it comes with a ’70s Soul feel and is mid-tempo. Nothing complicated about this track and a cool vocal that makes for a good final track on the original album. 11: MEMORIES BY THE SCORE. This has been recorded by many Jamaican artists over the years and Rudy comes up with one of the best versions. A smooth intro before Ruddy gives us a soulful vocal on which he is joined by a female chorus from time to time. One of the best tracks on the whole collection. 14: EVERY DAY IS JUST A HOLIDAY. Another song that has been recorded by many Jamaican artists. This has some fine percussion work and Ruddy is at his best and he is performing with Trinity. Another top-notch track and a foot-tapper. 18: I CAN’T STOP NOW. More great percussion on this fast-moving number that again comes with a chorus from time to time. The trumpet work on this is excellent and we end up with one of the best tracks on the collection. 20: DON’T GO CHANGING aka JUST THE WAY YOU ARE. This was originally written and recorded by Billy Joel way back and as with all Ruddy Thomas covers he does a fine job. A smooth vocal and a classic backing track have us listening to a track that could well have made the UK charts, but did not. 21: EMOTIONS (7″ MIX). This was recorded by several artists in a pop genre back in the ’70s, on this we have Ruddy along with Marcia Aitken, one of Jamaica’s finest female singers, and it adds up to a class recording. The rhythm track comes straight and this stands up well to the pop versions.

1: SINCE I FELL FOR YOU – George Nooks. Recorded by many other artists in the pop genre and on this George gives his all on a classy vocal. Some nice percussion work on the rhythm track and it comes with a female chorus. 4: AFTER YOU (WHAT AM I GONNA DO) – Wayne Wade. This is a cool sound with a punchy rhythm track. Again, as on many of the tracks, the vocalist is helped out by backing singers. The song and lyrics are courtesy of Wayne. 7: NICE FIRST SIGHT LOVING (7″ MIX) – Freddie McGregor. Freddie McGregor could be classed as one of Jamaica’s top vocalists. On this, he shows the listener why this could be true as he gives a classy performance on a top song along with a classic Reggae rhythm track. 9: JUST WHEN I NEEDED YOU MOST – Tyrone Taylor. This song was written and recorded by Randy VanWarmer and here we have Tyrone Taylor, who was a member of Byron Lee’s Dragonaires way back. On this Tyrone gives a first-class version of a much-recorded song by Jamaican artists, this recording being up there with those recordings. Punchy rhythm track and the vocalist deserved to be more highly rated in the UK than he was. 8: HEY YOU – Jimmy Riley. Jimmy Riley was born Martin James Norman Riley in 1954 in Kingston and was a member of The Sensations. A punchy number with a straight rhythm track and a clear and precise vocal from a top Jamaican artist. Jimmy was another artist who should have gained more UK success than he did. 16: (THIS IS) PARTY TIME – The Mighty Diamonds. A fast-moving number that has The Mighty Diamonds giving a classic performance of another fine song with a full-on rhythm track. 17: IT’S SO NICE TO BE WITH YOU – Hugh Griffiths. Not much one can find out about the vocalists, on this fast-moving number Hugh gives a soulful vocal and is helped out by a female chorus from time to time. Catchy overall sound and one to tap the feet to. 19: BEING WITH YOU – Ruddy Thomas. Smokey Robinson wrote and recorded this in the ’60s and here we have the return of Ruddy Thomas on a version that stands up well to the original. Classic rhythm track and one of the top recordings of this collection. 20: LEFT WITH A BROKEN HEART – George Nooks. This song has been recorded by several Jamaican artists and also The Four Tops way back. The song has always lent itself to the Reggae genre and this is no exception. George shows his vocal talents to the fore and this is a fine track to finish off this disc and the overall collection.

To sum up this 2 disc collection; it is a classic release for anyone who is into Lovers Reggae and the team that put this collection together deserves high praise. Cherry Red Records excel at putting out top Jamaican genre collections and this is no exception. At £12 99p it should find its way into many music collections, Jamaican or otherwise.

Let Me Know It

Conclusion This 2 disc collection is a classic release for anyone who is into Lovers Reggae.