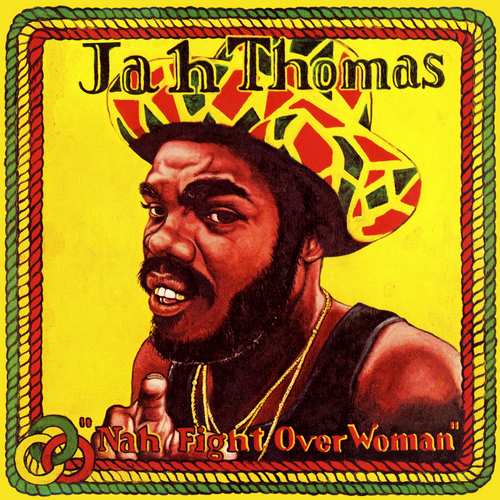 Initially released in 1980 by Gorgon Records in Jamaica and by Tads Records in the US, Jah Thomas’ third LP called Nah Fight Over Woman was released in the UK by Vista Sounds in 1983. More than forty years after its first release date, Burning Sounds reissues the LP on 180 gram vinyl, remastered and in stereo.

Born Nkrumah Thomas, Jah Thomas, emerged in the mid-1970s and soon belonged to the young top deejays of the day. He worked with producers such as Alvin Ranglin, who produced and released his single Midnight Rock, which topped the Jamaican chart in 1976. Despite being a local celebrity as an artist, Jah Thomas found international fame as one of the leading dancehall producers, who produced other performers like Triston Palma, Sugar Minott, Little John, and Early B. – as well as himself – whose records he released on his own labels. In particular his Midnight Rock imprint became very successful in the ’80s thanks to his working with the mighty Roots Radics, the name that was to be synonymous with dancehall.

His 1978 debut album Stop Yuh Loafin’, which gained international recognition via a release on the newly formed Greensleeves Records label, was in the next two years followed by the LPs Dance On The Corner and Nah Fight Over Woman. The latter features the typical, mostly sparse Roots Radics riddims that were recorded at Channel One and voiced and mixed at King Tubby Studio by Scientist. The tracks were then edited at Bullwackies Studio by Prince Douglas and Lloyd Barnes.

Here you hear Jah Thomas attacking relicked classic riddims such as The Royals’ Pick Up The Pieces, Roland Alphonso’s Jah Shakey, Jackie Mittoo & The Soul Vendors’ One Step Beyond, Larry Marshall’s Mean Girl, and Dawn Penn’s No, No, No. During the times this LP was recorded, the relicking of classic riddims was partly due to the harsher economic climate on the island, which made producers playing safe by using riddims that had proven to be popular in the dance halls. Also lyrically, the tunes featured here are dealing with topics that were popular in those days. In this case, Jan Thomas delivers several tunes of pure slackness such as Morning Ride, Hotel No Lack, and Cockee & Pussy featuring Sister Jackie. However, the first two tracks on Side A, Hear It In The News and Please Mr Officer deal with other themes. Jah Thomas in particular excels on Please Mr Officer. Then, in Stylee-Stylee he tells about playing on a sound in the dance with Jah Thomas on the go.

Hear It In The News