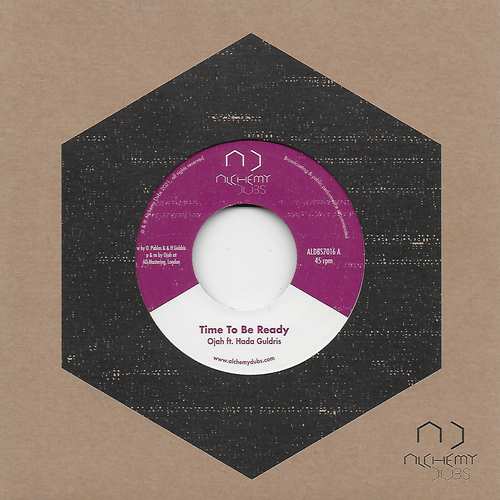 1 Time To Be Ready
2 Dub To Be Ready
After the release of the 7″ single Over Yonder by Ojah feat. Nik Torp in June 2021 nothing has been heard from London-based Alchemy Dubs anymore. But now, the record label that specialises in dub music is back in the racks with a brand new 7″ single from Spanish jazz singer/songwriter Hada Guldris aka Suka. As usual, this is a limited edition of 500 copies – hand-stamped and hand-numbered, served in a thick custom kraftliner sleeve with inner disco sleeves, which makes Alchemy Dub 7″ releases look so great.

Time To Be Ready is the second collaboration between Hada Guldris and her longtime friend, producer/mixing engineer and label owner Oscar Pablos “Ojah”. Their first collab appeared on a 7″ single in February 2018 under the title Life Is Better When You Smile. It actually was the very first release by Alchemy Dubs that included vocals.

We are again struck by the lovely vocals of Hada Guldris that grace the vocal cut on the A-side. Here she treats the listener’s eardrums to great sounding melodies and harmonies over a mesmerising riddim paired with lyrics that contain a strong message. Time To Be Ready was recorded at the same time as their previous collaboration and after about four years the song can be finally heard by those who want to hear it. Included on the flip side is Dub To Be Ready. This is a trippy and introverted instrumental dub version full of effects and modulations, which is mixed live by Ojah on his analog board.