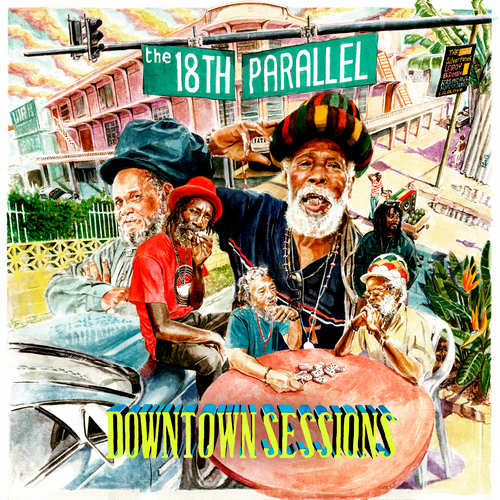 1. Cornell Campbell – Lovely Feeling
2. I Kong & Max Romeo – Just Like The Rainbow
3. Fred Locks – The System Is A Fraud
4. The Silvertones – Only Me
5. Leroy Brown – Times Tough

Since Fruits Records emerged in 2015 with the release of I Kong’s comeback album A Little Walk, the Swiss label dedicated to roots reggae music has become one of our favourite production camps. During the seven years of their existence, they have been putting out 100% quality reggae music mostly made in collaboration with, what you by now could call, a who’s who in reggae music. The notable list includes Jamaican artists and musicians such as The Viceroys, Cornell Campbell, Samory I, Oku Onuora, Lloyd Parks, Micah Shemaiah, Keith & Tex, Time Unlimited, Dennis Walks, Linval Thompson, Lone Ranger, Prince Alla, Burro Banton, Earl “Chinna” Smith, Sylvian White, Lee ‘Scratch’ Perry, Vin Morgan, Roy Ellis, Vin Gordon, Yasus Afari, and Mike Brooks. Besides that, they also did works with Spain-based Roberto Sánchez, Denmark’s Horns section of Guiding Star Orchestra, and from Switzerland, the vocal duo The I-Twins, Cosmic Shuffling, and Najavibes. Certainly not a bad list of names to say the least.

In 2017, Fruits Records, run by musicians Antonin Chatelain (drums), Léo Marin (guitar), and Mathias Liengme (keyboards and percussion), felt the need to have a new name for an in-house band responsible for studio activities in their Bridge Music Studio in Geneva, Switzerland. And thus, The 18th Parallel was born. On occasions, the core of The 18th Parallel is joined by members of well-known Swiss crews & live bands and sometimes also by Jamaican musicians (Leroy “Horsemouth” Wallace, Robbie Shakespeare, Dalton Browne, Scully Simms, and others). Guests from Jamaica and Europe provide the vocals for riddims laid by The 18th Parallel.

Late September, Fruits Records released two 7″ singles featuring tunes done by Fred Locks and Big Youth, which more or less announced the release of The 18th Parallel’s full-length Downtown Sessions. After listening to and reviewing these two singles, we concluded that Downtown Sessions was going to be a very strong album. And now it’s out on the street and let’s see, or even better hear, if it’s what we expected it would be.

Cornell Campbell is granted the honour to open the album with Lovely Feeling. A good choice as the veteran singer with a great falsetto voice comes up with an outstanding tune. It’s simply the kind of song that you can play over and over again without getting bored. If tune nice, play it twice! In this case more than twice! Although Cornell Campbell’s Lovely Feeling alone makes this album worth purchasing, there are also huge tunes from the aforementioned Fred Locks and Big Youth. The former’s The System Is A Fraud comes across a steppers riddim that is just perfect for the veteran’s vocal style. Fine backing vocals are provided by Maga Lion and Brother Wildman from the Emeterians. In all, Fred Locks’ effort is one of the highlights here. The same goes for Big Youth’s Man With A Mission. Underpinned by an appealing rub a dub riddim driven by an awesome bassline and featuring nice-sounding horns, Big Youth has created a scorcher. Just Like The Rainbow, the first vocal collaboration between Max Romeo and I Kong, doesn’t instantly have great appeal. Somehow, it needs several listens to fully appreciate this effort. Led by founding members Keith Coley and Gilmore Grant, The Silvertones are in good shape on the wonderful lover’s piece Only Me, which makes this track a joy to listen to. Canada-based Jamaican singer Leroy Brown has delivered some of the finest reggae songs one can imagine, but inexplicable remains an overlooked and underrated reggae artist. Here he delivers a fully convincing social commentary titled Times Tough in great style. Rasta elder and singer Ras Michael is present with the anthemic Ride On. Recorded at Earl “Chinna” Smith’s Inna De Yard in Kingston and accompanied by the Inna De Yard singers, Ride On is a track that evokes memories of the best years of Rasta roots reggae. Hopeton James’s captivating Just A Wonder is a song with a lot of soul, at points vocally a bit reminiscent of Curtis Mayfield. Simply beautiful. Lala Love, a Swiss songstress with an angelic voice, rounds off with the throughout enjoyable River.

In all, expectations are fulfilled as this is indeed a very strong album.

The Silvertones – Only Me

Conclusion This is a very strong album with nuff worthwhile tracks.