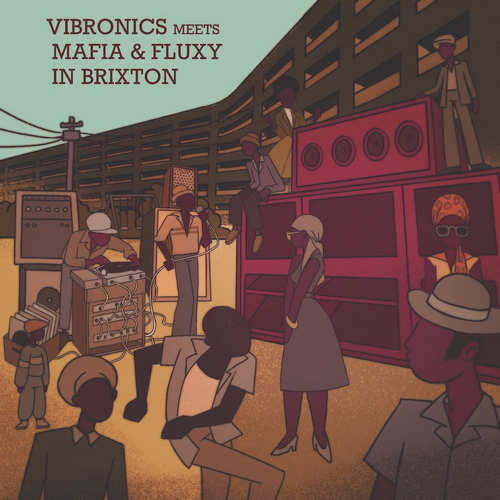 Steve Vibronics from Leicester UK has been producing roots reggae dub for over 20 years. Albums such as Vibronics Meets Jah Tubbys Vols 1 & 2, Dubs On A Mission, Steping Into Mexico, and Dub Italizer have been released on the producer’s label, SCOOPS Records.

For a brand new project, Steve Vibronics composed new riddims and then teamed up with the UK’s foremost riddim section and production team Mafia & Fluxy to record them in Iguana studios, located in the heart of Brixton, South London. Steve then took tapes to the Vibronics Dub Cupboard Studio for the full analogue dub treatment. The final result can be heard on the 8-track LP Vibronics Meets Mafia & Fluxy In Brixton, of course released on SCOOPS Records.

The UK riddim section and production team Mafia & Fluxy have become by far the UK’s toughest reggae outfit, and they affirm this status with their works on this LP. With this fresh album, Steve Vibronics and Mafia & Fluxy treat the avid dub head very well to a finely mixed and balanced set of dub pieces that should be played with volume. Dub Da Road, featuring UK Midlands-based Richie Culture’s drifting vocal, is a fascinating heavy steppers cut that fires on all cylinders. And more dub works to be found on this LP are utterly fascinating and compelling. Without a doubt, these include Dub Love with its really nice melodica parts and the glorious Red Dub Gold with its nice guitar chops and beautiful horn parts. But also the intriguing Dub Mizraab and Lights Of Dubs, with an unknown vocal drifting in and out of the mix, are dub workouts of the highest order.

This LP shows why Steve Vibronics has secured himself a prominent place in the premier league of UK producers.