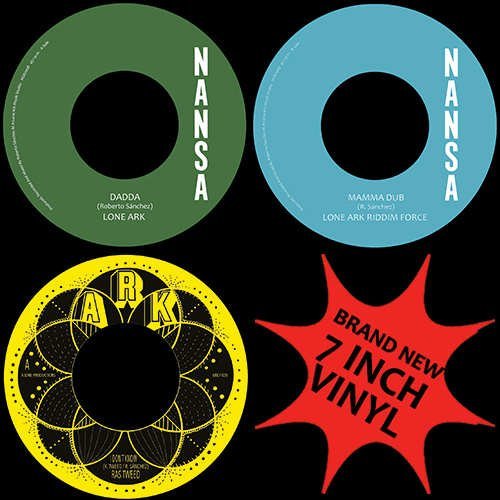 On the threshold of the new year, three brand new 7″ vinyl singles are coming out of Spain. Involved in all these three black wax platters is Roberto Sánchez, whether as singer, musician, producer, co-producer and/or mixing engineer.

The first single features Roberto Sánchez as the singer Lone Ark and is released on Nansa, the label run by Roberto Sánchez and Shanti Yalah. The name of the label was taken from the Nansa River in the west coast of Cantabria, the valley where Roberto’s father family comes from. Roberto Sánchez’s song Dadda actually goes back to 2015, the year of his father’s passing. That year, he composed the song and riddim and seven years later the heartical tribute to his father has been finally released. Not surprisingly, the riddim played by the Lone Ark Riddim Force brings to mind the Jamaican rockers riddims of the late ’70s. It are these types of riddims we’ve gotten familiar with as they have often appeared on album and single releases of A-Lone Productions and associated labels. Dadda is a very personal and moving tune in which Roberto “Lone Ark” Sánchez sings about the things he learned from his father and how deep he still hears his call. The song will be included on Lone Ark’s forthcoming showcase album. Always nice to have a dub version featured on the flip side, especially when it has the magic touch of Roberto Sánchez.

In 2019, Ras Teo meets Lone Ark’s dbl LP Then Thousand Lions saw the light of day. From the recordings that preceeded that outstanding release comes Ras Teo’s previously unreleased song dedicated to his mother and all mothers in the world simply called Mother. It’s actually a song Ras Teo wrote and recorded after he had heard Roberto Sánchez’s story about the riddim he had composed for his father’s tribute song. So, Mother is a next track on the riddim that underpins the Dadda tune. Ras Teo, whose sweet and rootical tone comes to the fore in his unique vocal style, treats the listener to a beautiful song that will surely please all mothers when they give it a listen. Also here, there’s a dub version included on the flip side which differs from the one that backs the Dadda single.

A totally different theme is touched in Ras Tweed’s I Don’t know, which previously appeared on the singer’s crucial 2021 LP Balance. The France-based veteran singer from Birmingham UK brings a superb message tune about the feeling of misunderstanding by the injustice of the world in which we live today. He delivers his message over a bouncing sounding riddim that was used for Horace Martin’s 2017 single True Love. It’s one of several riddims laid by the Lone Ark Riddim Force that features the late drummer Style Scott of Roots Radics and Dub Syndicate fame. The dub version on the b-side, which highlights the powerful drum & bass of the riddim, is different from the one on the Balance LP

Pick your choice and purchase before they’re gone!