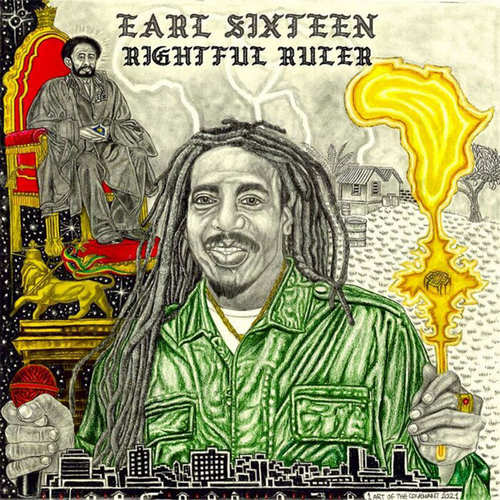 The history of Jamaican-born, UK-based Earl John Daley aka Earl Sixteen, without a doubt one of the classiest reggae singers, goes back to nearly an astonishing fifty years. In that time he has managed to acquire a very unique standing within the music. He has gained a fervent fan base throughout the years with his albums and live performances. After all these years the well-respected A-class veteran is still very active on stage and in the studio. Earlier this year, in March, he released the 10-track showcase LP Moving Forward which is now followed by Rightful Ruler, a next showcase album done in collaboration with the mighty Zion I Kings collective.

Rightful Ruler consists of four vocals followed by their respective dub mixes, which were done by JAH David. Earl Sixteen sounds amazing as he always does and also his songwriting is up to par. The LP gets started with one of its clear highlights, the message tune Jah Earth. It’s an echo-laden piece, driven by a powerful drum & bass and great trumpet play by Aba Ariginal with on top Earl Sixteen’s sterling vocals. Played at the highest volume, Jah Dub will easily vibrate the walls of the neighbours across the street. Killer dub! Next comes the title track Rightful Ruler, a beautiful spiritual song that has been given a nice touch with the addition of Sheldon Bernard’s flute. Even though not sounding as heavy as Jah Dub, its dub version is also worth hearing. The other side of the vinyl platter opens with the collaboration piece Find A Way featuring UK deejay Mr. Williamz. In all, this song and its dub leave a solid impression. The LP comes to an end with another highlight. First there’s the gorgeous Take Some Time that impresses mightily and then comes Take Some Dub to top it off in a big way.