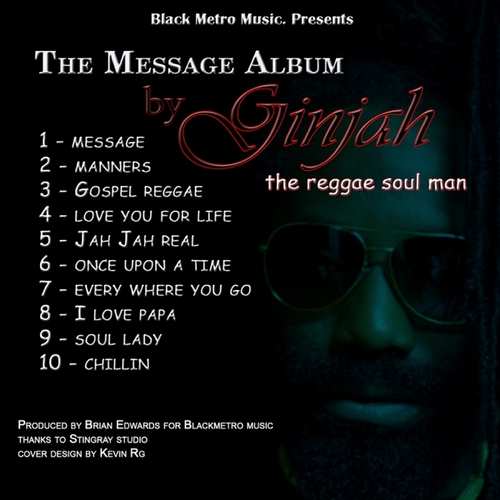 California-based Jamaican singer Ginjah is back on the trail with the follow-up to his 2021 released album The Reggae Soul Man, which was produced by Natures Way Entertainment. The new 10-track album titled The Message Album has been produced by Brian Edwards for Black Metro Music and is mixed and engineered by Carlton ‘Dillie’ McLeod at Stingray Studios in London UK. It’s the eighth full-length album from the singer whose recording career was launched more than twenty years ago. In 1999, he gained international recognition with his first 7″ single War Inna Di City, which was released by Beres Hammond on his Harmony House label. In recent times, Ginjah has scored hits with songs like Guilty Conscience, Fall In Love, These Arms, and Never Lost My Way.

On his previous albums, the singer has shown that he’s comfortable with singing conscious reggae songs as well as love ballads and The Message Album affirms this once again. Ginjah has a powerful, soulful voice that conveys all kinds of feelings as can be heard throughout this collection of tunes. In the opening track, Message, he pleads for bringing back the message in reggae music. It’s a nice song, delivered in such a way that it soothes the heart and soul. Not a bad start at all, but there are several better tracks to be found on this album. One of them is Manners. It’s a huge tune that is sung by Ginjah in a style reminiscent of Garnet Silk. And there are more similarly sung tunes included that draw a bit of special attention such as the strong spiritual roots piece Jah Jah Real and the vibrantly beautiful Once Upon A Time. The latter is a love tune, but it definitely isn’t a stereotypical straight ahead ballad which makes it more than worth listening to. A similar tune is Soul Lady. Here Ginjah pushes a lovely vibes on a cut of Black Metro Music’s devastating Controversy Riddim. What about the other songs featured here? Well, although overall these are not too special, they’re still entertaining enough to give them a repeated spin.