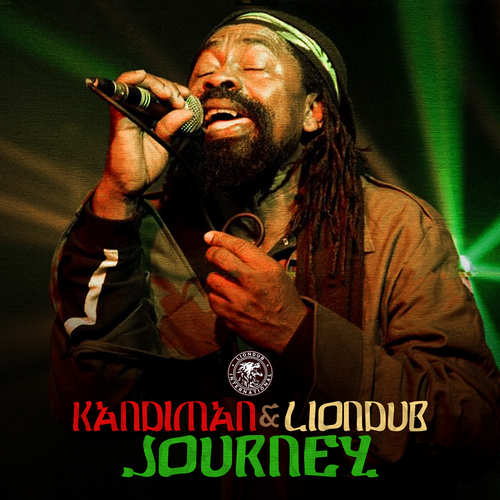 Kandiman (aka Candyman), who hails from Spanish Town, Jamaica, is a longtime Jamaican singer/songwriter dating back to the mid-’70s. He records under the names Barry Reid, Byron Reid, Candyman, and then Kandiman. The singer, who sounds very close the Bob Marley, did many ‘Bob Marley’ dubplate specials for sound systems worldwide. And thus it wasn’t really surprising that his debut album was titled Marley Culture. It was released in 1998 by his own Sweetbeat Records on LP and CD. Marley Culture isn’t an album of Marley covers, but an entertaining collection of fresh original songs. As far as we know, Marley Culture was the singer’s only full-length album released so far.

After all these years, Kandiman presents a new collection of tunes titled Journey, which is done in collaboration with multiformat DJ & music producer Liondub. Journey, of which the works actually started over a decade ago, features seven vocal offerings and their dub counterparts. Liondub provided songwriting, production & dub mixing on the album from his base in New York and in Kingston studios like Tuff Gong, Anchor, Cell Block, and Rooftop, while Kandiman graced the various riddim tracks with his phenomenal voice. The riddims were played by some of the greatest Jamaican players of instruments such as Gladstone Anderson, Dean Fraser, Winston “Bo Pee” Bowen, Obeah, Uziah “Sticky” Thompson, and Kirk Bennett along with Kandiman on bass and Liondub on bass & keys. These musicians offer a type of sound and vibe which is so rich and healthy that it easily can be qualified as top-notch. Combine this with an outstanding and skilled artist like Kandiman, who didn’t receive the type of attention you might have thought was in store for him, and you know that you’re potentially dealing with something special. And indeed, all this together makes this project rich, moving, and meaningful.

Not short on great things, this absolutely wonderful production gets going with its title track The Journey in which Kandiman tells us about the musical journey that took him from Jamaica to New York to work with Liondub. The Journey is a very nice tune and one which brings in quite a bit of sonic appeal. The very mature The Church is a praising piece that vocally and musically does something with the listener which is so crucial in music and particularly in roots reggae. Next comes the beautiful, echo-laden lovers song About Love, one of the more light-hearted types of songs featured here, which is followed by the vibrant Rasta Fire, which comes with so much power that it immediately strikes a chord. It then continues with two downright stellar offerings, Dutty Vagabond and the stirring Politician. Both are the undisputed highlights of the seven vocal tracks and thus the ones that simply urge you to push the repeat button! Vocally it comes to an end with Never Let Go. It’s a big vibed tune that deals with affairs of the heart and comes on a riddim that seems to get better and better the more you listen to the song.

Although it would have been great when more vocals were included, the musical satisfaction certainly isn’t less. And then, dub aficionados in particular will get plenty of musical satisfaction from the second part of this Journey album, which in itself is a mini-dub album. No inclusion of vocal snippets here (except for Politician (Dub Version)), but superbly dubbed-out versions of mighty riddims with some of the dubs being real heavy hitters. These include the dub versions of Rasta Fire and Dutty Vagabond. There’s variety in the way the dub versions are created and that keeps things interesting throughout. In fact, Journey is an utterly pleasant and totally satisfying ‘two-in-one’ album that fully showcases the great skills and talents of Kandiman and Liondub. Simply excellent!

Conclusion An excellent vocal + dub album. Not to be missed!