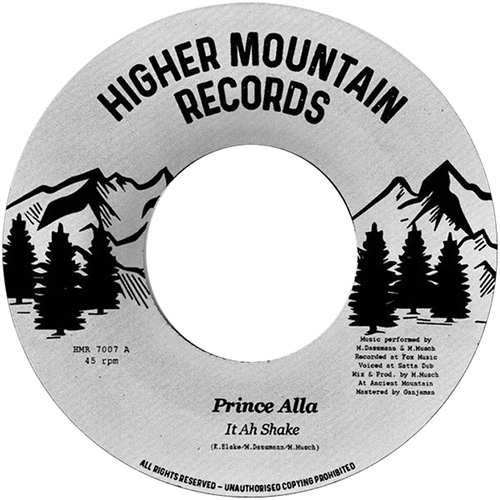 Veteran roors singer Prince Alla, born Keith Blake in Kingston Jamaica, began his career as a member of the rocksteady outfit the Leaders. After he had withdrawn from music business his good friend, producer Bertram Brown of Freedom Sounds, persuaded him to start recording again. And thus it happened that the deeply spiritual artist with a highly individual style, picked up his recording career, Since then he has worked with producers like Tappa Zukie, Bertram Brown, Joe Gibbs, and others, recording bonafide classics like Cities, Stone, Daniel, Rastafari, Bucket Bottom, Their Reward, Funeral, and Bosrah.

Prince Alla’s most recent single was recorded in October 2022 during his stay in Münster, Germany. It’s a collaborative effort between Higher Mountain Records and Ancient Mountain Records, two independent labels from that town which are not affiliated with each other. After more than five decades in music business, Prince Alla still delivers as can be heard on this flawless roots single. Across a well-crafted original riddim created by Martin Musch (drums) and Markus Dassmann (bass, piano, and guitar), the veteran superbly touches the ‘Babylon system’ topic in true Rasta style. But beware, the riddim sounds so nice that you may very well reach the end of the vocal cut without really given the lyrical context its just attention. Therefore it’s probably best to start playing the dub on the B-side before switching over the Prince Alla’s vocal piece.

This 7″ single is a must for the roots reggae massive.