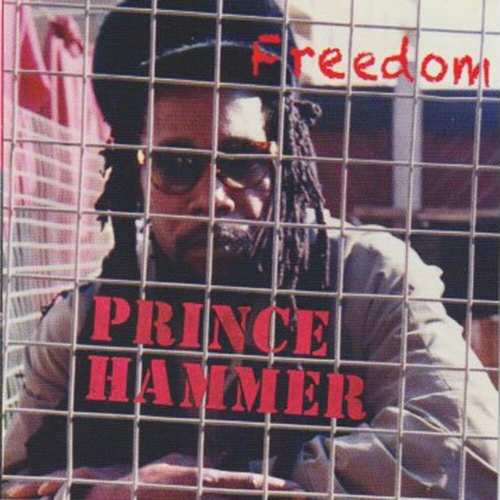 Prince Hammer, born Berris Simpson, is one of those names from the golden reggae era that never got the proper exposure and recognition he should have received, despite putting out several classic tunes. The 2001 compilation album Rastafari Bible 1976-1982 was a successful and near faultless retrospective that every reggae fan should check out.

The first producer who gave him a chance was Glen Brown, with whom recorded two singles “Tel Aviv Rock” and “Sugar Down There”. His first stage appearance followed shortly in Kingston with promotor and singer Clancy Eccles. Success in Jamaica and the UK followed with the tunes King Of Kings and Adis Ababa, but it was the song Ten Thousand Lions that made him a household name in the reggae community. In that period he scored with the self-produced tune Dreadlocks Ting. His first album was called The Bible, produced by Blacka Morwell. He also made a name as a producer with the album If Jah Should Come Now by Rod Taylor, now regarded as a classic roots album and Jennifer Lara’s killer tune Jah Will Lead Us Home.

His friendship with Prince Far I and Adrian Sherwood resulted in the UK in Roots Encounter Part One, where he performed with roots singer Bim Sherman and Price Far I. The release of his second and third albums followed, entitled Roots Me Roots and Vengeance. After a while he began to divide his time between recording and community youth work, setting up the ‘Movement Of Youth Project’ which encouraged young people into music. During the Brixton riots, he recorded the track Brixton Trial And Crosses on the Josiah label which went to number two in the Black Echoes chart. In the early ’80s, he recorded several tunes for Roy Cousins and in 1989 they released the album Respect I Man, which in 2014 was followed by Sensimilla Island. Although this CD was credited to Prince Hammer, we consider it a fine Various Artists set, showcasing Roy Cousins’ production qualities with Prince Hammer in charge of most of the tracks.

Eight years after the release of Sensimilla Island, and even thirty-three years after Respect I Man, Roy Cousins presents a brand new 16-track Prince Hammer CD entitled Freedom. Although Prince Hammer’s heydays are long gone, an album by this veteran artist still has to be taken into consideration. Especially because this project is helmed by Roy Cousins who has worked with the venerable likes of The Royals, Earl Sixteen, Prince Far I, Knowledge, Charlie Chaplin, Don Carlos, and many others throughout the years. For this album he has Prince Hammer provided classic riddims that were laid by the Forces Of Music in Jamaica with additional horns by Alby Donnelly (sax) and Gemma Wild (sax & flute), and percussion by Jaunie Wayer. All vocals were overdubbed and mixed at Glass Recording Studio, in Wirral, Merseyside UK.

After the twittering of birds, the first track called Blessings gets going. Across an echo-laden bass-driven version of Horace Andy’s Money, The Root Of All Evil riddim, Prince Hammer delivers a wicked song in praise of H.I.M. King Selassie I. One of the CD’s highlights. And as one might expect from this rasta artist there are more spiritual songs featured on this album. These include Man Alone, When It Comes To Jah, and Humble, all coming on relicked Studio One riddims – the Heptones’ Love Me Always, the Silvertones’ Smile riddim, and Winston Francis’ Mr. Fix It respectively – the downright stellar Lightning And Thunder across The Royals’ If You Want Good riddim, and the Nyahbinghi-styled Selassie Train. Prince Hammer uses a storytelling style to deliver tunes such as the outstanding social commentary In This Time and the entertaining herb tune Two Bald Head on Gregory Isaacs’ Storm riddim. Furthermore, listeners will certainly enjoy winners like the title track Freedom, the message tune Where Has All The Friendship Gone?, and Zaudity which deals with affairs of the heart. The CD is rounded off with a rather mediocre cover version of Delroy Wilson’s Movie Star aka I Don’t Know Why.

Conclusion Do not let this album go beneath your radar.