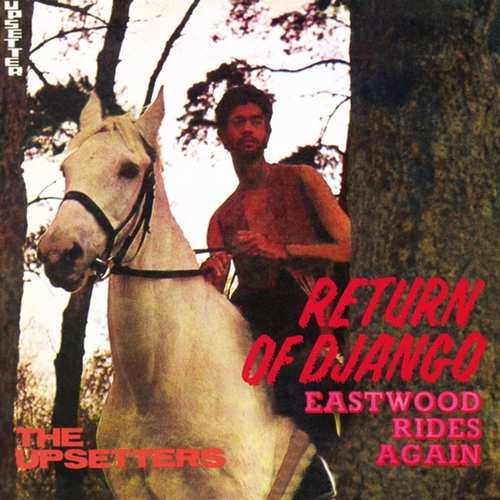 50 years ago these historically important albums were released and via Cherry Red Records have come together to form this, fascinating and enjoyable CD collection. This includes the No. 5 UK hit ‘Return Of Django’ and soon after Trojan Released an album of the same name and another spaghetti western themed instrumental album containing further recordings from The Upsetters and Lee Perry on production. Both albums were popular with both Jamaican and British fans.

1: RETURN OF DJANGO. This needs no introduction and was released in Jamaica at the end of 1968 on Lee Perry’s Upsetter label. It is an infectious recording with a pulsating rhythm track, along with stand-out percussion work. What a collection opener. 2: TOUCH OF FIRE. This comes with some strange organ playing and has a laid-back rhythm track, unlike the previous track. Quite hard to get one’s head around. 3: COLD SWEAT. This is more like we expect from this outfit having an organ-based rhythm track in front of a chug-along rhythm. Nothing complicated about this, just a toe-tapping recording. It also comes with a spoken intro. 4: DRUGS AND POISON. Released in 1969 it is another organ-dominated instrumental with a mid-tempo rhythm. Some fine saxophone playing which adds to what is a catchy recording. 5: SOULFUL I. This is a slightly faster number with a punchy rhythm track. The ever-present organ is here again and although nothing outstanding it has a catchy, toe-tapping make-up. Released in 1968 on the UK Upsetter label it came with Milton Morris and ‘No Bread And Butter’ on the flip side. 6: NIGHT DOCTOR. Officially Jackie Mittoo is playing organ on this recording that comes with another chug-along rhythm track. It was released in 1969 in the UK and came with ‘Night Doctor Version’ on the flip side. 7: ONE PUNCH. This comes different from previous tracks with the only instrument on the recording being the organ. The sound of clicking can be heard, this doesn’t have much going for it. 8: EIGHT FOR EIGHT. Coming with a spoken intro it moves into a mid-tempo number with a spooky feel. The organ work is infectious and it has a weird one-word vocal on the backing track from time-to-time. Catchy number, released in Jamaica 1968 and UK 1969. 9: A LIVE INJECTION. Released in 1969 this is one of the groups more well-known recordings and has a chug-along rhythm track. The organ on this is intensive and comes via Jackie Mittoo again. Catchy toe-tapper and a stand-out track on the original vinyl album. On the 7″ original the flip side was ‘Everything For Fun’ by The Bleechers with backing from The Upsetters. 10: MAN FROM M.I.5. Starting off with a spoken intro it moves into a swift moving slice of instrumental Reggae. The organ is not so pronounced as on many of the groups recordings with the backing track more prominent. The original Jamaican/UK 7″ release was on the Upsetter label and also found its way onto the Randy’s label in the UK. 11: TEN TO TWELVE. Starting off with a spooky, spoken intro before moving into a fast-moving slice of fine Jamaican instrumental Reggae. It has a one-work spoken vocal from time-to-time. Released 1969 with ‘People Funny F1 Tune’ by Lee Perry on the flip. 12: MEDICAL OPERATION. This fast-moving number comes as a full-on instrumental with classic organ over a cool rhythm track. Overal this is a catchy number and was released in July 1969 with ‘Babam Bam’ by Lee Perry on the 7″ flip-side.

13: EASTWOOD RIDES AGAIN. Starting off the original album and this disc we have a mid-tempo number that starts with a strange intro. Nothing classic about this track that lends itself to the title of album/cd but does get the toes-tapping. The album was released in 1970. 14: HIT ME. A fast-moving organ dominated track with a click-click sound on the rhythm track. This tends to go round-and-round and becomes slightly boring by the end. Nonetheless it is a true Lee Perry production. 15: KNOCK ON WOOD. Yes, this the well-known song that has been recorded by many artists over the years. Strangely this does not feature The Upsetters and is The Untouchables performing with top-notch vocals over a chug-along rhythm track. As a 7″ single it was released in December 1970. 16: POPCORN. This mid-tempo number is again one that goes around-and-around and dose not really go anywhere. On the 7″ single one finds ‘Tight Spot’ by Dave Barker & The Upsetters. 17: CATCH THIS. This is not a true Reggae sound but more a Funk sound again with the click-click sound on the rhythm track. This again goes around-and-around and overall is nothing but a good Lee Perry production. 18: YOU ARE ADORABLE. This tune may be familiar to the listener as many artists have given it the vocal treatment over the years. It lends itself well to this chug-along version that comes with organ and saxophone on the backing track. A good listen this one. 19: CAPSOL. This is a mid-tempo tune that has some top saxophone on the rhythm track. Although this does go around-and-around it ends up as a great, catchy tune. On the 7″ this was the flip side to the previous track. 20: POWER PACK. Classic Lee Perry production on which we hear a muted organ, this is yet another chug-along track. This becomes quite hypnotic by its close. 21: DOLLAR IN THE TEETH. This is a catchy mid-tempo sound that was the flip side of ‘Return To Django back in 1969. The organ sound is catchy and this was a great dance tune from the first skinhead wave. Used to be played on the twisters at fairgrounds. 22: BABY BABY. On this sound we have a vocal by Val Bennett over a fast-moving rhythm on which we hear some fine trombone work. This comes as 2min 13secs of catchy Lee Perry produced Reggae. 23: DJANGO (OL’ MAN RIVER). This has some strange male vocal from time-to-time, could be Lee Perry and has a fast rhythm track. Again the organ playing is classic and overall we end up with a catchy track. It has nothing to do with the much recorded ‘Ol Man River’ 24: RED HOT. This is more like a Dub sound, not really having a backing track. Aslower number on which we hear a prominent bass guitar. Nothing really classic about this just one of many Lee Perry productions over the years. 25: SALT AND PEPPER. Starts with a spoken intro before moving into a mid-tempo funky sound. This is another sound that goes around-and-around and at 2min 35secs is long enough. 26: TIGHT SPOT. In some circles this is credited to Dave Barker & The Upsetters and although there is no sign of Dave it does appear on the album ‘Prisoner Of Love’ with a talk-over from Mr Barker.

To sum up this single CD collection one would have to say that for fans of Lee Perry’s production work this may be a must have. As the house band for Mr. Perry The Upsetters consisted of many top Jamaican musicians from over the years. As always the team at Cherry Red Records have made available more Jamaican sounds, many of which are new to the CD format and at £11 49p it is a good purchase.

Conclusion Two historically important albums brought together on a fascinating and enjoyable CD.