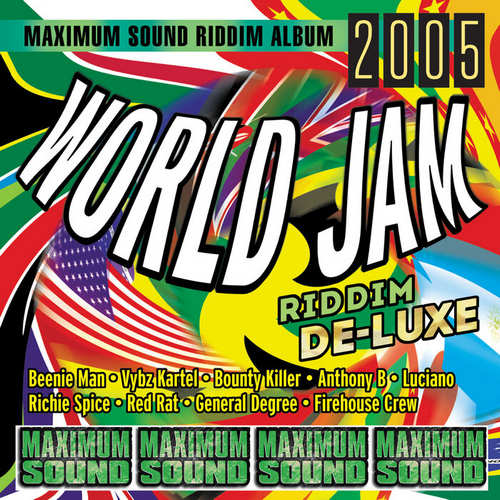 Producer Frenchie has reissued the World Jam Riddim as digital download. Initially released in 2005 by via Greensleeves as part of their Rhythm Album Series (#73), it’s now been put out on the producer’s Maximum Sound label as a ‘De-luxe’ edition. It differs a bit from the original CD release in two ways. First there’s the addition of a dub version of the riddim and secondly the tracklist now features Anthony B’s huge World A Reggae Music as opener. Here’s what Souljah had to say when he reviewed the World Jam Riddim CD in 2005.

After Damian ‘Jr Gong’ Marley conquered the dancehalls with his Welcome To Jamrock on Taxi’s and Ini Kamoze’s 1983 World A Music riddim (of course also known in its Jammys version backing Junior Reid’s Boom Shack A Lack), it was only a matter time for some producer to come up with a full selection on the riddim. Frenchie, the talented in the UK residing French producer of Maximum Sound, responsible for riddims like Itch, Jedi – also featured on Chich 13 – Dancehall Versions – and of course the absolute dancehall ruling Intercom riddim, as well as his very strong, still underrated Jumbie riddim, the steelpan and hardcore bass heavy drum beats driven Blue Steel and lately the Fowl Fight and Anthony B’s album Black Star delivers another wicked riddim.

Produced alongside Captain Sinbad of Kingston’s Bad 2000 Music, the wicked Sly & Robbie riddim has been relicked by the Firehouse Crew to full effect. Bounty Killer’s very fine Poor People kicks it off in fine style, followed by Luciano’s wicked A No Like We No Like Them. Vybz Kartel in How We Ride warns welcome to gunshot in an excellent example of gun lyrics and on-top-of-the-riddim delivery, before former ARP-singer Da’Ville delivers the outstanding ganja tune My Grade in Waterhouse style. Beenie Man is in fine form on From Jamaica as is Richie Spice on the conscious All For A Cause. Anthony B takes on the original for the fiercely delivered World A Reggae Music with beautiful female backing vocals, followed by the great conscious tune Stand Up Firm by Lukie D, who seems to be back en vogue (fortunately). Ward 21 contribute the very entertaining Worldwide Connection dusting off the hook of Nicodemus’ early ’80s Boneman Connection, before another crooner Tony Curtis convinces with the conscious Bless Me.

Chukki Star represents the UK in fine style with Hard Fi Smile and founding Third World member Milton ‘Prilly’ Hamilton, who recorded three tunes for Captain Sinbad in 1992, returns with Murderer and all you can do upon hearing the tune is wonder where he has been in the meanwhile, as this is the kind of voice and delivery that makes great impact. Future Troubles tells about his worries in Too Much Blood A Run down a Kingston street / babylon a oppress the meek” followed by Chuck Fender’s fine Jah No Sleep. The always entertaining (and I keep emphasising: still underrated) General Degree sends out a warning in Must Run Away and Red Rat sounds atypical but great on his Ghetto Youths Fi Rich. Baby G’s In The Street is an okay tune but shows his real strength is production, not deejaying, although the hook the youth dem dying in the streets / youth dem crying in the streets / dem a lying in the streets is catchy, and unfortunately once again very true in Jamaica these days. The wicked version of this made to rock the dancehalls, Firehouse Crew’s World Jam Rhythm, closes this very entertaining set of tunes, showing how fine the relick of this classic riddim is.

If you’ve never heard this one, then it’s time to go and check it now!

Anthony B – World A Reggae Music