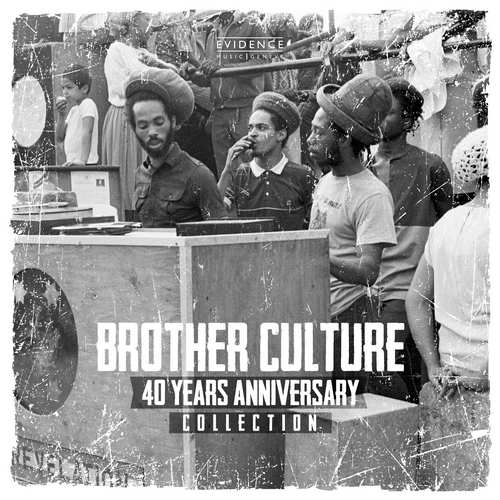 With a music career that spans four decades, an artist truly deserves to get an anniversary release. And that’s what one of the leading figures in the UK reggae scene has been granted. Switzerland-based Evidence Music presents Brother Culture’s 40 Years Anniversary Collection, a testament to the artist’s rich musical journey from the UK to its international reach.

Born Simon Fajemisin to a Nigerian father and Irish mother, the youngest of seven children began his musical career after returning from Nigeria to the UK in 1981. After traveling with sound systems in south London such as Papa Channa, Prince Rising, and Young Enchanter, he joined Jah Revelation Sound and within a year became one of the youngest MCs in Brixton, London. At the time, Jah Revelation Muzik was the house sound system on which Sister Culture (his sister) was one of the most prominent MCs. Brother Culture was the host MC for Jah Revelation as they traveled throughout the UK playing private and official Twelve Tribes of Israel dances. The time spent with Jah Revelation allowed Brother Culture to be part of the 1980s sound system explosion, playing shows with sounds such as Sir Coxsone, Jah Shaka, King Tafari, and Renegade Sound. In 1985, Brother Culture participated and performed at the Crown Prince ball on Hope Road in Kingston, Jamaica, with other MCs from around the world representing the Twelve Tribes of Israel. This trip led Brother Culture to move to the United States in November 1986 and perform throughout the US and Canada with Brigadier Jerry.

It was in 1987 that Brother Culture started recording singles, his first being Hip Hop Or It Could Be Reggae produced by Patrick “Progressive Sounds” and released on the Progressive Sounds label. The track became a hit on the underground circuit and Brother Culture began working with various producers. Then, In the early 1990s, he started MCing at London’s Dub Club, which led to new associations with UK dub/roots producers such as Adrian Sherwood and Manasseh. Throughout the 1990s, he continued to tour and record and also became involved in the burgeoning bass music scene. Brother Culture proved that he was able to adapt his unique style to the new emerging scenes and began to work with labels such as Liquid Sound Design. Since the early 2000s, he travels the world as an established MC artist spreading out the positive message of Jah music. He also continues to record new productions for many producers and bands such as The Prodigy (Thunder from the 2009 album Invaders Must Die), Mungo’s Hifi, Hammerbass, Roots Garden Label, Dubmatix, Black Redemption, Kinyama Sounds, Black Redemption, Reggae Roast, and RUNN Records. In 2010, Brother Culture was featured in his first video clip for the track Spiritually Equipped, which was produced by Kinyama Sounds. He collaborated with electronic music group The Prodigy on their 2015 album The Day Is The Enemy and No Tourist from 2018. In 2018, Evidence Music released the acclaimed 14-track album Code Name, which is now followed by the 40 Years Anniversary Collection featuring predominantly tracks coming from Evidence Music and its associates.

The first track brings to mind 2011, the year Geneva’s Kinyama Sounds released Brother Culture’s 7-track EP City Of Vibes on which the album opener Rastafari Army was featured (also the track Catchy is taken from that EP). However, it’s not the original version that leaps off the speakers but the “40 Years Anniversary Version”. It’s actually one of eight updated versions of old songs. Brother Culture being a fully-fledged member of the Rastafari Army, it’s surely an appropriate choice to start this collection with this song. The infectious Jump Up Pon It, known from the Code Name album, shifts the mood from roots reggae to a UK stepper cut with electronic influences. The third track of the opening pack, the 2011 head-nodding piece Super Nova, is a good example of Brother Culture’s often-praised combination of storytelling and deliverance. After this satisfying opening pack, listeners are offered no less than seventeen tracks including several winners. Among them are the enjoyable old-skool styled Heal Them, Strong, a track that demonstrates the artist’s tight lyrical ability, and the haunting updated version of the social commentary Ghetto War from his 2012 collaboration with Ondubground. The powerful UK stepper Dreadlocks Thing has Brother Culture flowing madly over a riddim created by Derrick Sound and Little Lion Sound. The album comes to an end with the updated version of the 2017 tune Obliterate which is underpinned by an appealing traditional steppers style riddim.

Brother Culture’s 40 Years Anniversary Collection will also be available on CD and Vinyl LP at the beginning of 2023.

Jump Up Pon It