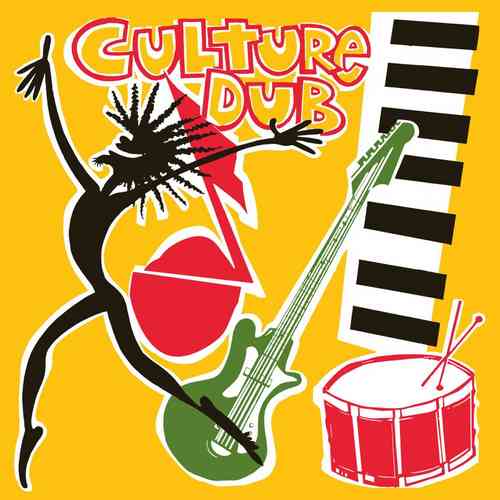 Side A
1. Dub Shines Bright
2. Mixed Skillfully
3. Iron Sharpened This Dub
4. Tell Me Where You Got The Dub

The initial vocal trio Culture -named The African Disciples- was formed by lead vocalist Joseph Hill and harmony singers Albert Walker and Kenneth Dayes. Joseph Hill had recorded the sublime Behold The Land for Coxsone Dodd in 1972, but Dodd didn’t release it until Culture became popular. As a member of Studio One’s house band The Soul Defenders, he provided backing vocals and played percussion. When the trio teamed up with Joe Gibbs, he changed their name to Culture and released a slew of fine singles. The single Two Sevens Clash, a stark foreboding prophecy of civilization in pure chaos, was one of the biggest roots reggae records of that year. Joseph Hill became the personification of roots reggae, with a voice like Burning Spear, Bob Marley-esque songwriting abilities, and was heavily inspired by the black militancy ideas of Marcus Garvey. That same year Gibbs issued the majestic lp Two Sevens Clash which is still heralded as one of the greatest all-time reggae releases, commanding your attention from the first note.

After a dispute over royalties, an all too common issue in the reggae business, Culture switched to Sonia Pottinger’s camp with its High Note and Sky Note labels. It was the trio’s musical headquarters from late 1977 until early 1980. During that prolific period, they recorded three vocal albums, a dub set, and nuff singles. In 1978 an (unofficial?) album called Africa Stand Alone was released on April Records, sharing some tracks of Harder Than The Rest but inna different mix. The original Culture line-up split up in 1982, and since Joseph Hill – as a solo performer or with additional backing vocalists, but always using the name Culture – has enjoyed considerable success with a string of quality roots albums. Joseph Hill died on a tour bus on 19 August 2006. His son Kenyatta subsequently took over his role in Culture.

The album Culture Dub is the dub version of Harder Than The Rest, the first album they recorded for Sonia Pottinger in 1978. The vocal set has been reissued multiple times, however, that is not the case for Culture Dub. A pirated(?) version was supposedly issued but had low quality. Music On Vinyl is thus commendable for reissuing this album in a limited edition of 750 copies on orange-colored vinyl, which is an admirable feat. This Dutch vinyl-only reissue label has built a reputation for releasing superb reissues of classic reggae albums. Some of their most popular titles include Bob Andy’s 1978 album Lots of Love and I, Mikey Dread’s album World War III, the Gregory Isaacs album Out Deh!, and Bunny Wailers set Blackheart Man. Fans of classic reggae music should definitely check out Music On Vinyl’s catalog!

The dub set only features 8 tracks, whilst the vocal version has 10. Unfortunately, but not insurmountable, given the superb quality of the dubs. The dubs to the popular Stop The Fussing And Fighting and Work On Natty are not included. The vocal counterpart Harder Than The Rest was recorded in the late Duke Reid’s Treasure Isle studios, with the adept engineer Errol Brown behind the controls, who would subsequently join Bob Marley & The Wailers. Sonia Pottinger is credited as a producer, but she will have contributed little to nothing on the musical front. Joseph Hill was a genius, who knew exactly what he wanted and could communicate it well to the team of skilled musicians known as The Revolutionaries.

The way Errol Brown has done his work results in dubs where the original melody line is fairly easy to follow. There is no overwhelming excess of effects; they are fairly subdued edits. What stands out is that the organ plays a clear role in the dubs, in solid combination with the unyielding bass lines. Here and there we hear the horns, providing a signature element in particular tracks like Tell Me Where You Got The Dub and Dub So Free. Errol has incorporated practically no vocals into the dubs, although brief, echo-soaked vocal snippets can be heard in some tracks. Behold This Dub begins similarly to the vocal version and evolves into a more relaxed instrumental rendition of the original.

Conclusion Yet another unmissable vinyl re-release from Music On Vinyl.