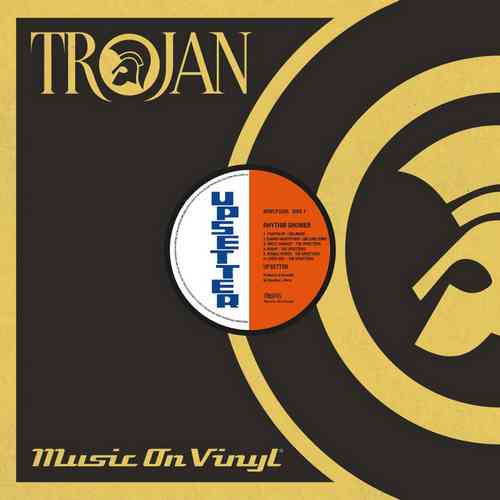 Rainford Hugh Perry, better known as Lee “Scratch” Perry (or Pipecock Jackson, The Gong, Upsetter), is one of the most important and influential figures in the history of Jamaican popular music. Only very few other names have had such a strong appeal on a worldwide level than this engineer, producer, songwriter, entertainer, and artist. He made his initial impact performing at Studio One in the ska era, was instrumental in Joe Gibbs’ early success, and made radical impressions with the most innovative work of Bob Marley & The Wailers. With his studio band the Upsetters he released just over 100 singles between 1969 and 1974 by artists such as Dave Barker, Dennis Alcapone, The Stingers, Neville Hinds, Leo Graham, Big Youth, Junior Byles, U Roy, Dillinger, and many more.

In 1974, Perry opened his own studio, the Black Ark, in his backyard at Washington Gardens, Kingston, to have more control over his productions. Not hindered by the somewhat rudimentary set-up and its basic equipment, Lee Perry found himself building top-notch productions, known for their creative production and recording techniques. One of the main reasons dub and sound effects have become so ingrained in all sorts of popular music is because of the incredible work that Lee Perry has done throughout his career. He created some of the most influential reggae music of all time, with the likes of Bob Marley and the Wailers and the Congos. His atmospheric productions are full of rich, textured sound, which makes his music feel truly alive. His music has a powerful and timeless appeal, and it has helped shape the sound of dub and sound effects in ways that are impossible to ignore. He burned the studio to the ground at the end of the 1970s. This event, preceded by increasingly bizarre and erratic behavior, ended an era of creativity and production highlights. In the 1980s, he kept a low profile while the world re-discovered the sheer quality and brilliance of his music. The 1990s was a prolific period, collaborating with a diversity of musicians and producers. Although already in his 80s, he kept recording and touring all over the globe. On August 29, 2021, he set out on his final tour to Zion.

This album, credited to Upsetter, was released in 1973. It was initially released in a very limited Jamaican pressing with no sleeve, and it became better known when re-released by the Trojan label as part of its originally 3 LP, later 2-CD set The Upsetter Collection, first issued in 1986. Since its first release, the album has only been re-released once, in 2018, with reviews stating that the sound quality is below par. Music On Vinyl, the Dutch reissue company, releases a high-quality reissue in a limited edition of 1500 copies on colored vinyl, encased in a specially created sleeve by Music On Vinyl in partnership with Trojan Records.

Lee Perry was a master at reusing a good riddim, a practise that other producers also liked to use. With the help of his rock-solid backing band The Upsetters, as well as numerous singers and deejays, songs were released on the same riddim more or less on an ongoing basis, giving free rein to his creativity. Needless to say, the same is true here. The album is characterized by its gritty, swinging, often rousing musical approach, driven primarily by Winston Wright’s incredible organ playing. Tighten Up by deejay Dillinger is a powerful way to start the album. King Scratch also utilized the riddim for his popular song Cane River Rock. Later, Dillinger would achieve worldwide fame with the crossover success of Cocaine In My Brain. Next comes another deejay, Sir Lord Comic, with Django Shoots First aka Bronco. The song is also included on the 1970 lp Eastwood Rides Again, en Val Bennett recorded a fantastic swinging saxophone version of it, Val Blows In. Sokup Back Biter, the original of the instrumental tune Sokup, was performed by deejay Dennis Alcapone. A year later, the riddim reappeared, this time in a vocal version called Darkness On The City, delivered by Jimmy Riley as Judge Winchester.

The slightly trippy organ piece Double Power covers The Stingers’ Give Me Power. To Be A Lover, a reworking of William Bell’s soul hit I Forgot to Be Your Lover, was recorded by Shenley Duffus in 1972. This song’s updated riddim version, Lover Ver., features Shenley’s voice floating and echoing wonderfully in between the instrumentation. Years later, Lee Perry recorded a brilliant version of the same song with George Faith, featured on the album To Be A Lover. Dillinger returns with two efforts on side 2. Skanking is a good song, but Connection, his adaptation of Lee Perry’s French Connection, is our favorite. Over to Kuchy Skank. This backing track from Words Of My Mouth, sung by The Gatherers, is transformed on Kuchy Skank with the help of melodica virtuoso Augustus Pablo. This riddim was so successful that Scratch released version after version with artists including Max Romeo, Prince Django, Jah Lion, and Sangie Davis. Even in 2005, JStar effectively utilized the riddim for Unbreak My Dub. The album’s last track, Opperation, is an instrumental medley and may be designed as an experiment. Scratch wasn’t very careful when it came to combining sections of several background tracks; the procedure isn’t particularly seamless, in fact, it’s abrupt with no transition. We recognize the riddims of Give Me Power, Love And Respect by The Ethiopians, and Fever by Junior Byles after thorough listening.

Conclusion Lee Perry's genius production skills can be found on this historic album.