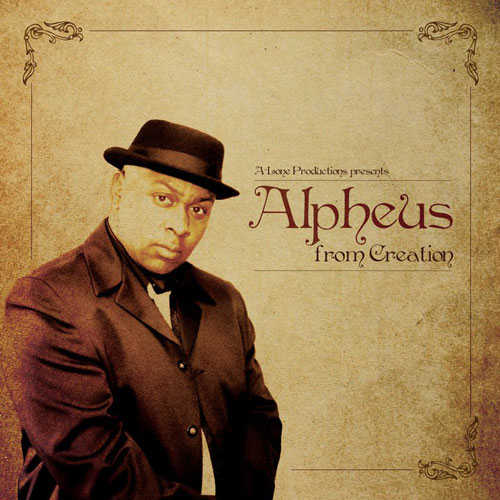 Born and raised by Jamaican parents in London, Alpheus developed a passion for singing after seeing Sam Cooke perform on television. His love for reggae developed as he was exposed to singers like Don Carlos, Dennis Brown, Frankie Paul. Michael Gordon, Thriller U to name but a few. A meeting with Tony Brevett of The Melodians led to the recording of his debut album “Quality Time” for famed producer Coxsone Dodd in 1999. It then took him 8 years to present the follow up to that wicked Studio One album, but it was well worth the wait. The sophomore album “Everything For A Reason” was recorded in Europe with the French duo Bost & Bim involved in most of the tracks, but also productions from Irie Ites, Stingray, Mijto and Pow Pow were included. The album was one of the highlights of 2007.

And now, at the beginning of 2011, it’s good to see Alpheus — without any doubt one of the few quality singers of reggae music nowadays — return with an awesome album called “From Creation”. In comparison with his sophomore album, this third collection of tunes sees a significant change in musical direction as Alpheus presents 16 cuts of very well produced ska and rocksteady music. The singer explains: “I kept quiet for about 18 months after the album for Special Delivery. I only went on one ‘one-drop’ riddim for a label in Nantes called Metastone and that was my last ‘one-drop’. I’m not doing that any more. Now it’s only ska and rocksteady – music that’s long lasting”.

“From Creation” is produced by Roberto Sánchez, who surprised us with the Earl Zero album ‘And God Said To Man’ in 2010. The recording and mixing sessions took place between 2007 and 2010. Roberto Sánchez and the musicians of the Spanish backing band The Lone Ark Riddim Force have thoughtfully built the riddims, fresh originals as well as relicked versions of classic Jamaican riddims, and they did a more than fantastic job here! Thus the listener will recognize timeless Studio One riddims and reworkings of Phil Pratt tunes. The latter was a Jamaican producer who entered the scene in 1966, but he definitely made a name for himself in the first half of the 1970s with soulful productions by Dennis Brown (“Black Magic Woman”), John Holt (“Strange Things” and “My Heart Is Gone”) and Pat Kelly (“They Talk About Love”).

The strength and also the beauty of this album is the fact that you can hear that Alpheus is totally at ease with the riddims and sound. While listening to each and every track included on “From Creation” it’s obvious that he sings from the heart and that’s a good thing. Without doubt it’s Roberto Sánchez who has to be credited for this as he is truly a genius when it comes to create great music. Yes, of course his productions are strongly influenced by the sounds from the days of old, but it’s done in such a way that it surely isn’t a gimmick. It’s the inspiration, the admiration and the craftmanship that makes his production works real and authentic. It’s striking to witness that the sound and quality of relicked riddims and the fresh originals don’t differ. A singer like Alpheus fully benefits from Roberto Sánchez’s approach and the vibes he creates at his A-Lone Ark Muzik Studio in Santander, Spain.

The album starts off with the title track “From Creation”, Alpheus’ fine interpretation of Hemsley Morris’ hit tune “Little Things”. By chosing this tune as the opener, Alpheus and Roberto Sánchez more or less make a statement, namely that the listener is going to listen to an album that goes deep. After the Studio One interpretation “Call It A Day” comes the self penned tune “We Are Strong”, a pumping ska tune with an uplifting message. The next track, also a self penned tune, “Far Away” is a medium tempo killer song with a classic Hammond organ intro. Phil Pratt’s instrumental “Dirty Dozen” forms the base for “Ultimate”, a very fine lovers tune.

The wicked “Live And Learn” is one of the many highlights on this album. It’s actually a reworking of Phil Pratt’s “Reach Out”. Alpheus’ vocal delivery on “In Time”, an appealing song with great lyrics, reminds us of that other great Jamaican vocalist, Glen Washington. The single “Turnaround Ball” is an awesome relick of the Wailers ska hit “Do You Remember”. “Keep The Faith” borrows its horns intro from a song, but we can’t figure out which song. Excellent tune!

Freddie McGregor recorded numerous quality sides for Coxsone Dodd. One of his finest efforts was “We Need More Love”. Alpheus reworks the song and calls it “Inside Out”. A smooth and touching lovers tune! The album closes with four worthwhile instrumental tracks. First there’s the Studio One relick “When You Call Me”. Next comes a Pablo-esque work-out, “Far Melody”, followed by the dub-workouts of “Keep The Faith” and “From Creation”, both fine examples of quality dub tunes. Already looking forward to the next album from the unbeatable duo Alpheus and Roberto Sánchez.

Conclusion Probably most so-called 'reggae purists' will not fully appreciate Alpheus latest album, but if you're into quality singing, solid live instrumentation and revival do check this one out and let Alpheus take you back to the wonderful days of rocksteady and ska.