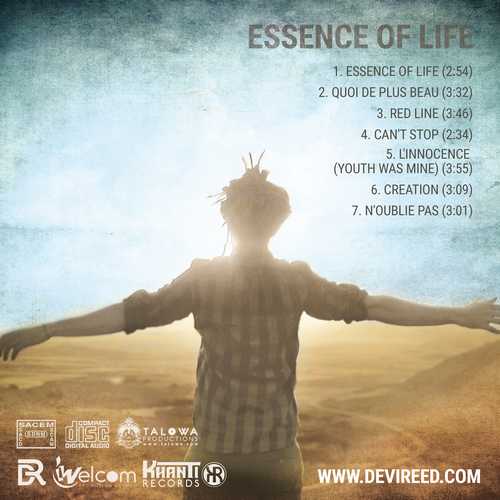 Up and coming French artist Devi Reed was born in 1989 in Amsterdam. He was lead singer of the French band The Banyans, with whom he recorded two albums and toured extensively in Europe. As of 2016 Devi Reed began a promising solo career. From the beginning he tried to mix several musical styles and influences to obtain a unique sound of his own. The result is a subtle mix of reggae, hip hop, soul, dancehall and some techno grooves. He writes his own music, inspired by the daily life that surrounds him, sometimes in French, sometimes in English. With the help of Clément Thouard (drums, engineer, backing vocals) and Otam (deejay, machinist, guitar, bass) he has recorded a mini album during the fall of 2016.

The cross-over mini album “Essence Of Life” sees Devi Reed in fine shape, opening in urban style with the title track. Smooth hip hop, some little dancehall and r’n’b flavours are mixed into a slow paced music collage calling unto us to love life. “Quoi De Plus Beau” is underpinned by a slow reggae riddim, and deals with themes of loneliness and human relations, while “Red Line” sees him inna more aggressive fashion, strong tune! “L’innocence (Youth was Mine)” – about the lost innocence of childhood – is a jazzy, soul song, followed by the reggae song “Creation”. “N’oublie Pas”, an acoustic ballad that urges listeners to stick to their principles, closes this mini album.