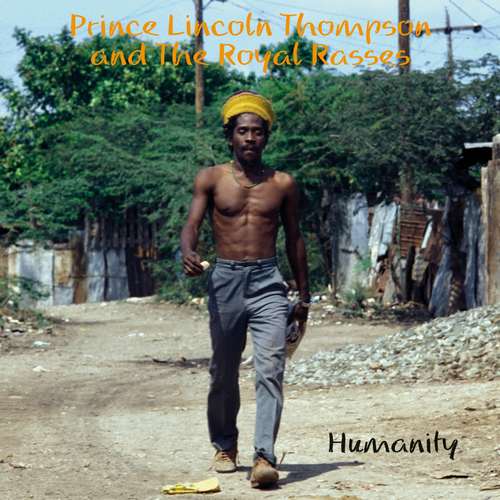 Prince Lincoln Thompson, nicknamed ‘Socks’, ‘Sax’ in patois, because he was fond of coloured socks, became know in the late 1960s as a member of The Tartans. Other members of the group, who would later make a name for themselves in the reggae scene, were Cedric Myton and Devon Russell. With the single Dance All Night the group tasted local notoriety. The next step in his career took place in the early 1970s when he recorded some very memorable tunes for Coxsone Dodd. With his distinctive falsetto voice he managed to strike the right chord with the Jamaican audience.

In 1975 he founded the Royal Rass-es with Cedric Myton and Keith Peterkin. In the meantime, he had founded the God Sent label, on which he released several quality singles, including Love The Way It Should Be and Kingston 11. After a deal with Ballistic Records/United Artists, the album Humanity was released in 1979. Packed in an expensive full color sleeve, plus an inner sleeve featuring the lyrics, and a lot of promotion, they tried to reach the crossover audience. The albums that followed did not impress much and Lincoln relocated to London where he opened a shop called The Rasses Fish Mart and Grocery Store. He recorded another album in 1983, and released a final album, 21st Century, in 1997. Two years later he died in London, aged just 49.

The opening song San Salvador, one of his most famous tunes, paints a bleak picture of people living in poverty because of oppression: “The smaller portion of this population, yes..It is they who rules and control the whole nation”. Salvation comes from Jah, who will destroy them, as the prophecies told: “I’m gonna sing about Jah destruction, yeah..It was foretold in the prophecies, higher height”. As a bonus, this tune has also been added in dub plate style. This early mix was played out exclusively on Lloydie Coxsone’s sound system at the time, sparking interest in Prince Lincoln’s music. In addition to the song San Salvador, side 1 of the LP also contains the extremely impressive song They Know Not Jah, in which Prince Lincoln testifies of his strong beliefs in Jah and Rastafari.

Side 2 of the album features the title track, a true classic. Besides Junior Murvin’s Police And Thieves, this was one of the most played reggae songs of 1976. Then there’s the lyrically gripping track, Mr. Kissinger, which is a strong lash against worldwide American imperialism, as shaped by, among others, Henry Kissinger, the then Secretary of State for Foreign Affairs. The closing track, Kingston 11, stands alone in terms of quality. In this instantly recognizable song, he looks back to the neighborhood where he grew up, Kingston 11. Cast in a beautiful rocksteady-like arrangement, this is a more than worthy closing of this album.

They Know Not Jah