Prince Lincoln Thompson and the Royal Rasses – Ride With The Rasses 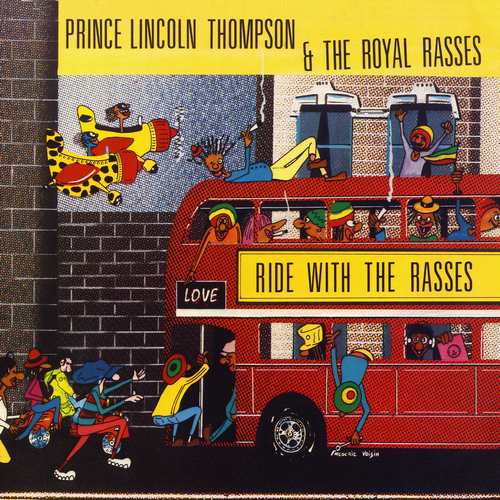 Hot on the heels of the reissued 1979 debut LP Humanity, which at the time was heavily promoted by Ballistic Records, Burning Sound re-releases another LP from Prince Lincoln Thompson & The Royal Rasses. This time it’s their fourth album entitled Ride With The Rasses, originally put out in 1982 on Prince Lincoln’s own record label, God Sent Records. The roots reggae album is now released as 180 Gram red vinyl with additional extensive sleeve notes.

Ride With The Rasses was the follow up of the LP Natural Wild for Ballistic Records. However, the latter went out of business in the process of making the album which made Prince Lincoln decide to return to Jamaica in 1981, where the God Sent label was given new life with the help of German company Juicy People. In 1982, the tracks for Ride With The Rasses were recorded at the Tuff Gong studios and Channel One studios with musicians such as Earl ‘Bagga’ Walker, Mikey Boo, Cornell Marshall, George ‘Dusty’ Miller, Pablove Black, Bobby Ellis, Tommy McCook, Herman Marquis, and Lawrence White.

The Ride With The Rasses album was an unequivocal statement of Prince Lincoln’s Rastafarian faith and a discernible demonstration that his “determination (was) inexhaustible”. As was written on the original back of the album: “The Rasses is a concept based on I and I faith in Jah Rastafari. I consider I and I selves to be the ambassadors of His Imperial Majesty’s Kingdom. And as for the testimonies of I and I message, I and I deters mination is inexhaustible.” Most likely roots reggae purists will prefer this album over the highly acclaimed Humanity set with its mixture of reggae, soul, and a touch of funk.

The first side of this vinyl platter opens in great style with the previously released 12″ single One Common Need, a conscious piece that addresses a similar issue as the well-known song Humanity. It’s another example of Prince Lincoln’s soaring falsetto and imaginative phrasing giving a song a sense of urgency and conviction. Here he reflects on the traits of humanity with lyrics such as “all human beings share one common need, but some people are only filled with greed” and “food, clothing, and shelter, is all people need now”. It’s followed by the serious message tune Kinky Money Game in which Prince Lincoln opposes the monetary system. The last track of this side, the entertaining Come Spring, has a lighter feel and vibe. It’s a song that refers to the cold times he was confronted with while being in England, which made him long for warmer days.

With Fall Back, the solid opener of side 2, Prince Lincoln returns with a more serious theme and continues to do so with The Brotherhood Of Man, an intriguing song with lyrics like “In this world of so many different races, so many different kinds of faces, where everyone points a finger, but nobody says he’s an offender”. Next comes the title track Ride With The Rasses, which is a nice danceable song. The album comes to an end with the musically and lyrically impressive No Future At All, a deep roots song that fires on all cylinders. In 1982, the album went relatively unnoticed, but now that it has been made available again it’s strongly recommended to not only give it a listen but also add it to your reggae collection.

Conclusion Strongly recommended to add this LP to your reggae collection.