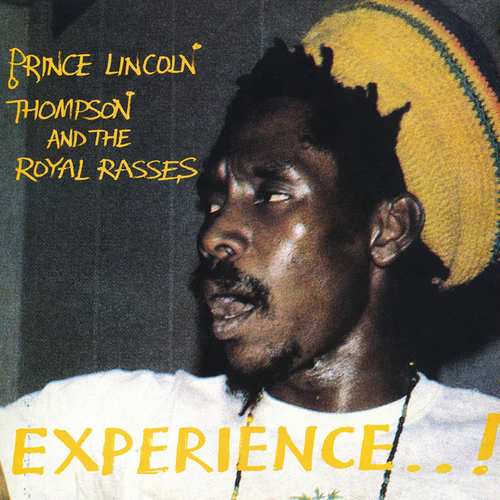 After earlier in the year having reissued Prince Lincoln and The Royal Rasses LPs Humanity, Ride With The Rasses, and Natural Wild, Burning Sounds now comes up with the fourth reissue LP of Prince Lincoln Thompson, the LP Experience..! – pressed on yellow vinyl. Originally released on United Artists subsidiary Ballistic Records in 1979 (credited to The Rass-es to avoid confusion with reggae group The Royals who were also recording for Ballistic Records), and then reissued in 1983 by Vista Sounds (credited to Prince Lincoln Thompson and The Royal Rasses), the album – the follow-up of Humanity – features tracks recorded and mixed at Harry J’s Recording Studio by Sylvan Morris.

On all tracks, Prince Lincoln Thompson’s solemn yet distinct falsetto voice is beautifully supported by the ethereal harmonies of vocalists Johnny Kool and Cap. Musically this entire album is more than just the traditional drum & bass sound and although the arrangements throughout this album are sophisticated, they don’t lack the roots feel on most of the tracks. As one might expect from an artist like Prince Lincoln who has proven to possess great songwriting abilities, he comes up with thoughtful lyrics in each and every song. In contrast with the debut LP Humanity, which mostly contained tunes that were already released as singles, the sophomore album Experience..! includes completely new songs with True Experience, a reworking of Prince Lincoln’s acclaimed Studio One tune from 1972, being the only exception. A number of tracks clearly reflect Prince Lincoln Thompson’s belief in the Rastafarian faith. Just listen to the lyrics of Walk In Jah light and Thanksgiving, to hear him express the doctrine of the physical immortality of the Rastafari movement. Personal favourites are Nobody Here But Me, Slave Driver, Blessed Are The Meek, and For Once In My Life.

At the time of its original release, Experience..! wasn’t particularly popular with many of the roots reggae fans who didn’t want to know of a group (and Ballistic Records) who were striving for crossover success with their so-called inter-reg approach. Understandable, but also a pity because Prince Lincoln and The Royal Rasses and this album definitely deserve more appreciation. Sure, Experience..! isn’t a really great LP but it certainly is a good collection of tunes.

Nobody Here But Me

Conclusion In all, this LP is worth adding to your reggae collection.