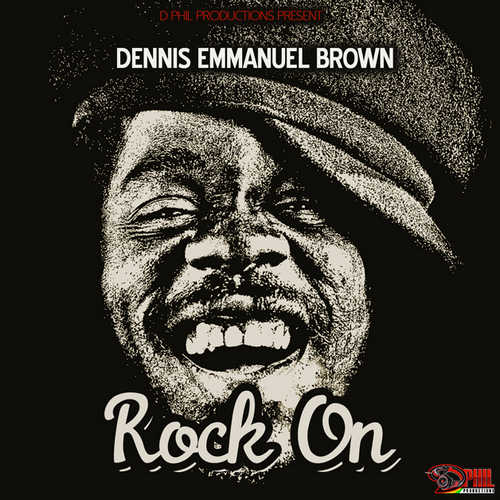 If you’re a reggae fan who doesn’t know Dennis Emmanuel Brown and his music, you must have been living on another planet, because this reggae icon is one of the greatest voices Jamaica’s popular music has ever known. So no need to introduce the one who was dubbed The Crown Prince of Reggae by Bob Marley. In fact Dennis Brown has always been more popular in Jamaica than the King of Reggae himself.

Dennis Brown was a prolific singer who recorded for quite a number of producers on the Island and abroad. In June 1999, mere weeks before his untimely death on 1 July, he did a a recording session for Phillip Thompson of D Phil Productions at Frank Nickle’s studio, King Bravel Studio in New York. Sixteen years later Phil Thompson finally makes the tunes recorded during this session available on the 3-track “Rock On EP”. While listening to the latter, it brings tears to your eyes hearing that distinctive, instantly recognizable voice being in good shape on three of his last tunes. Once again you realize what a great loss for reggae music it was when he passed away at the age of 42.

The production work of five-time Grammy winning producer and recording/mix engineer James “Bonzai” Caruso, who has worked with chart toppers Madonna, Mary J Blige and Notorius BIG to name a few, is superb. The same goes for the backing tracks done by musicians such as Computer Paul (keyboards), Derek Barnett (bass), Noel Alphonso, Jerry Johnson, Dean Fraser and Kevin Bachelor (horns), Sky Juice (percussions), Val Douglas (bass), Sydney Mills (keyboards, organ), Larry McDonald (percussions), Andy Bassford (guitar), Danny Marshall (drums), and Earl Appleton (piano). Throughout his career Dennis Brown showed that he was equally at ease with both romantic and conscious material. Here he shines bright on a captivating lovers rock piece, the soulful “Baby It’s You”, which was mixed by the late Philip Smart. However it’s “Somewhere Over The Rainbow”, a song of sheer beauty, that gives you goose bumps every time you hear it coming out of your speakers. In between there’s the title track “Rock On”, a song punctuated by the strong rock guitar strumming of Andy Bassford. This track has been given a very contemporary feel and vibe, which makes that it could work perfectly well for the ears of a broad audience.