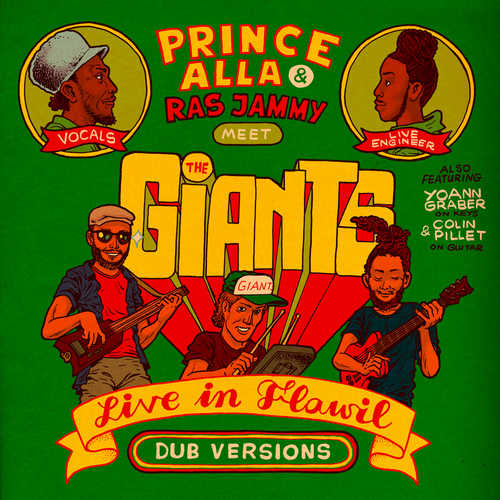 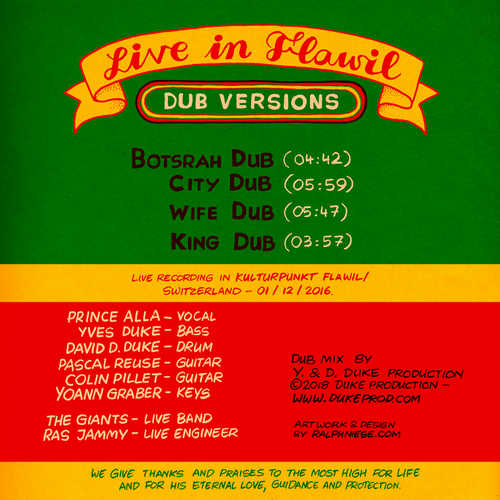 The “Prince Alla & Ras Jammy Meet The Giants – Live in Flawil: Dub Versions EP” includes four versions of great Prince Alla roots reggae classics: “Bosrah”, “City Without Pity”, “Lot’s Wife” and “King Of The Road”. These tracks were recorded live in Kulturpunkt Flawil, Switzerland on December 1, 2016 by Trinidadian engineer Ras Jammy of Suns of Dub fame, while afterwards the dub mix was done by David & Yves Duke, the drum & bass section of The Giants, the band that expertly backed Prince Alla during these recordings.

From beginning to end the listener is treated to solid roots vibes presented in a dubwise style, with Prince Alla’s vocal still sounding powerful when he delivers his conscious lyrics. “Botsrah Dub” revisits “Bosrah”, the rasta singer’s classic tune from the late ’70s which was mixed by Lee Perry at The Black Ark. “City Dub” is vintage sufferer’s roots with the lyrics pointing to harsh realities. A murderous version!! “Wife Dub” is Prince Alla’s zealous retelling of the Biblical tale of Lot and his wife who were residents of the iniquitous city of Sodom. The original version was an absolute roots killer and this dubbed up version surely does it justice. Last but not least there’s “King Dub”. Probably not one of Prince Alla’s best known tunes, but its “King Of The Road” riddim is a real driver!

Solid dubby roots food for all and one.