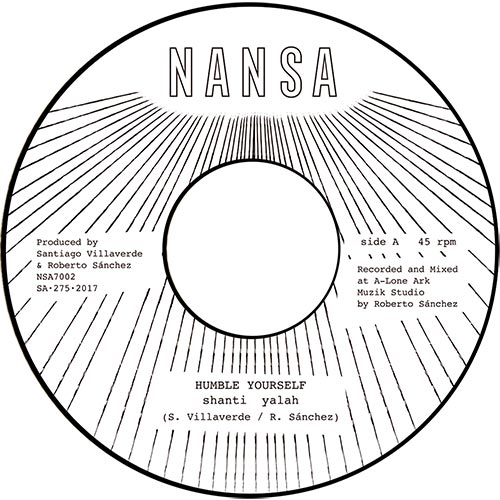 After the previously released 7″ single “Walled Garden”, Nansa Records has unleashed a second track taken from Shanti Yalah’s 2017 debut LP “Creation”. This time it’s the opening track of Side B, “Humble Yourself”, that gets its 7″ vinyl release.

Shanti Yalah, artist name of Santiago Villaverde – producer and founder of the Nansa label, delivers a fully convincing and totally satisfying conscious roots piece that brings to mind the golden sounds of roots reggae from the latter half of the 1970s. Compared with the album track, the 7″ single version of “Humble Yourself” has been given a different mix by co-producer Roberto Sánchez.

Not featured on the vocal album, but on its counterpart dub LP “Creation In Dub”, is the worthwhile “Dub Version” on the B-side. Also this track, credited to the Sons Of Nansa, which a.o. includes members known from the always expertly playing Lone Ark Riddim Force, has gotten a different mix.