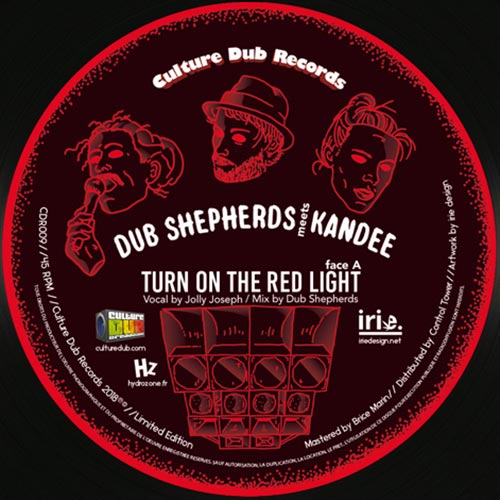 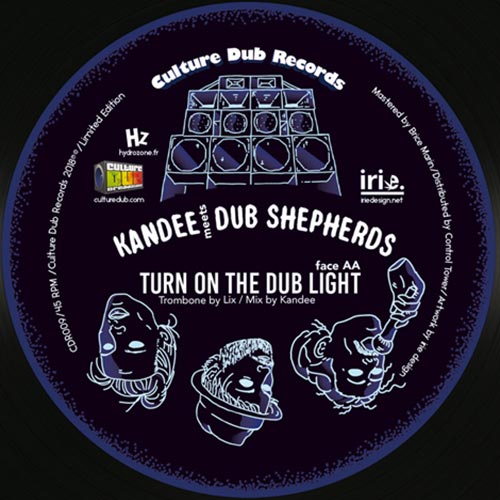 From French Culture Dub Records comes their ninth vinyl release and their second 7″ single. The double-A sided single features a collaboration between talented French dubmaker Kandee and a duo that calls themselves the Dub Shepherds.

Kandee draws his inspiration from Iration Steppas, Panda Dub and Mahom. He produces dynamic Dub music with Etnic, Electro and UK Steppers influences. He has released several albums on labels like Marée Bass, ODG Prod and Maha Mila Prod. besides that he has released some notable tunes on vinyl on record labels such as Blackboard Jungle, Lion’s Den and Moonshine Recordings.

The Dub Shepherds are formed by the duo Doctor Charty and Jolly Joseph, both members of a French Reggae band called La Granja Orchestra. They are producers, musicians and singers and are doing things like in the good old days : jamming, recording themselves and other musicians live and direct, mixing all tracks on analogue desk straight to 1/4″ tape. They are real Dub addicts and draw their inspiratio from King Tubby and Lee ‘Scratch’ Perry. in 2010 they ctreated their first homemade riddim, which was a remake of the classic “Drifter” from Dennis Walks.

The A-side features the “Turn The On Red Light”, a real nice groovy tune with Dub Shepherds’ Jolly Joseph himself being the vocalist. Although the singer has a decent vocal delivery he fails to make a very strong impression. Definitely the best of the two sides is “Turn On The Dub Light”. This powerful sounding instrumental is a massive Steppers piece with trombone player Lix of The Hornsmen Section doing an excellent job. It’s this one, tailor-made for Sound System use, that goes on repeat!!

Worth buying for the AA-side alone.