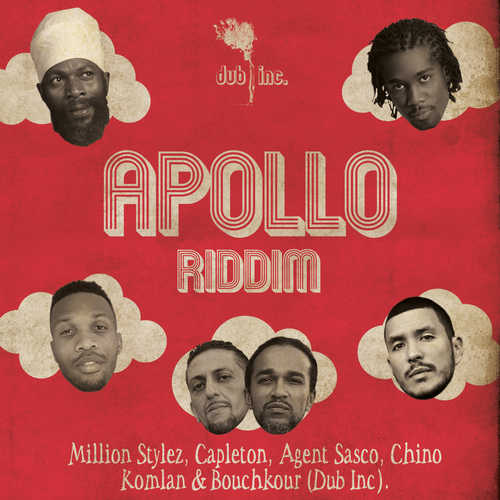 In May 2016 Dub Inc, a successful 1997 formed French band that combines elements of dancehall, dub, and ska with the sounds of hip-hop vocalized in French and Arabic, released the single “Triste Époque”, which later that year was included on the band’s sixth studio album album “So What”.

Just like they did before with their juggling projects “No Doubt” (2011), “Better Run” (2015), and “They Want” (2016), Dub inc has invited different artists to voice a cut on the riddim that underpinned “Triste Époque”. And thus the “Apollo Riddim” features the names of Swedish singjay Million Stylez and successful Jamaican artists Chino, Assassin aka Agent Sasco and Capleton.

The message of Dub Inc’s “Triste Époque” is clearly related to terrorist attacks that occured in France, although you need to understand the French lyrics to excactly know what the band’s vocalists Hakim “Bouchkour” Meridja and Aurélien “Komlan” Zohou are singing about. Capleton’s stellar “Wake Up”, delivered in his instantly recognizable fiery style, is the first highlight of this EP. It’s followed by solid offerings by Chino and Million Stylez, before Assassin aka Agent Sasco comes up with a huge piece called “Too Much”. The clean version of the riddim attached at the end is also worth paying attention to.

Very nice to the ears!