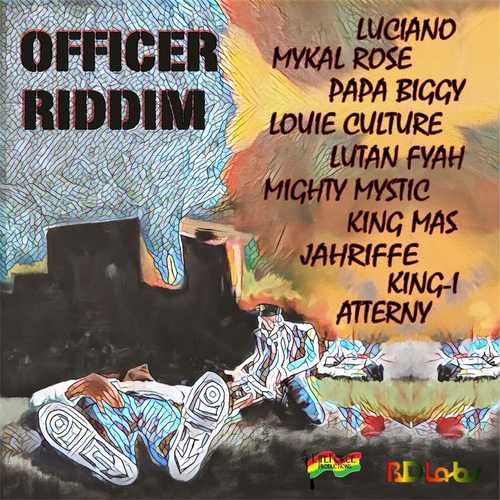 The “Officer” riddim was recently released as a digital release only, created by Pappa Biggy aka Courtney Porteous. He’s been active in the JA music scene since the early ’80s. In 2001 he relocated to the US where produced tunes for his label Lifeforce Production in his Real Life Studio. His tune “Officer” forms the backdrop for his latest effort, a 10 track riddim set. The contemporary roots riddim with some nice subtle dub fx creates a suited backdrop for the rootical messages from the artists. The added sound fx like shooting, police horns and thunder create an atmosphere that matches the lyrical content of the songs.

He voiced the riddim with the help of stalwarts such as Luciano, Lutan Fyah, Louie Culture and some lesser known names. Biggy’s tune, the opener, stands out! He gets impressive vocal support from Mykal Rose and together they deliver an authoritative tune about police violence and forgotten ‘roots’. Impressive! Ever dependable Luciano pours out a firm tune about a son who has gone adrift despite his mother’s efforts. Cultural deejay Louie Culture rides the riddim with the ‘smoking’ ganja tune “Kush”. Lutan Fyah’s “Dem A Come” is yet another quality song which addresses violence: “nobody move, nobody get hurt”.

More good tunes from artists like King Mas, a native of Boston, who portrays a grim picture of today’s system. Mighty Mystic, JA born and now living in the US, delivers his message of peace, love, struggle and perseverance with confidence! King-I hails from Trinidad & Tobago, but was raised in the US. His vocal style is somewhat reminiscent of Jah Cure and his tune is a good roots effort. With a convincing performance Atterny describes the life inna yard: “it’s Rough & Tuff down inna yard , me friend”. The last tune takes the lead song and turns it into a ‘Scientist’ like dub version.