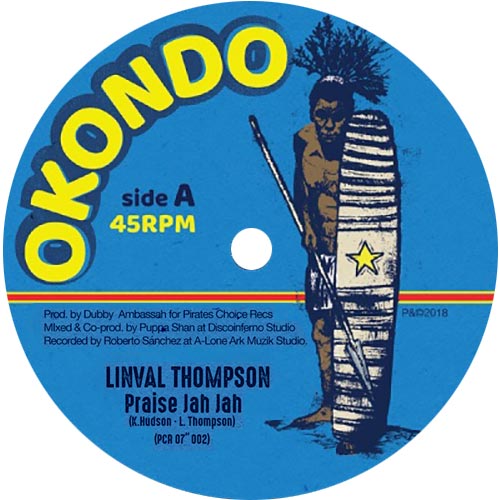 Hot on the heels of a 12″ vinyl single featuring vocal cuts by Earl Zero and Kenny Knots, a melodica instrumental and a dub version for the same riddim, Pirates Choice Recordings have released Linval Thompson’s brand new 7″ single “Praise Jah Jah”. Long-time Reggae aficionados and riddim spotters alike will instantly recognize the opening part of the riddim as being that of Keith Hudson’s “True True To My Heart” from 1972 or the probably better known “Satan Side” by Horace Andy & Earl ‘Chinna’ Smith as Earl Flute. This super heavyweight early ’70s roots riddim from producer/singer Keith Hudson was derived from the riddim of War’s 1971 funk tune “Slippin’ Into Darkness”, which actually is an adaptation of the beat from The Wailers’ “Get Up, Stand Up”.

As might be expected producer Dubby Ambassah, along with co-producers Puppa Shan & Roberto Sanchez, have revitalized the riddim of the Keith Hudson tune in a great and respectful way. The listener is virtually transported back to the 1970s, not only with the stellar live played riddim but also with Linval Thompson’s classic earthly tone to his voice which on “Praise Jah Jah” sounds nearly as good as ever. The legendary singer/producer brings to mind the huge rootical vibes he created with some of his best own efforts such as for example “Jah Jah Is I Guiding Star”. And if you like the ‘version’ of a tune included on a single you’re in for a treat. in the “Version” on the flipside the killer bassline of the riddim comes to the fore in all its glory.