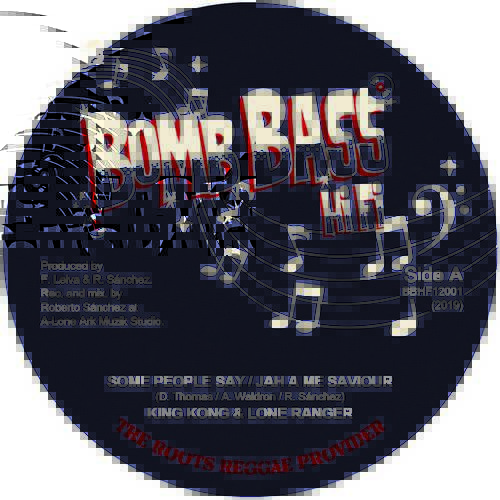 Fran Leiva from Crucial Ruler and co-producer of some releases from Pirates Choice Recordings has founded a new label called Bomb Bass HiFi. For the first release on his own imprint he collaborated with fellow countryman Roberto Sánchez, who co-produced, recorded and mixed the 4 tracks of this 12″ vinyl release. Anyone who has ever heard singles and albums in which Roberto Sánchez was involved knows what can be expected: good quality music that harks back to golden sounds of Jamaica’s popular music from the late ’70s/early ’80s.

Side A features vocal cuts by King Kong and Lone Ranger. The former made some strong records dancehall records back in the ’80s, while the latter achieved his real breakthrough in 1980. Things get started with King Kong’s solid “Some People Say”, which treats the listener to conscious lyrics delivered over a great sounding rich riddim laden with lush horns. The mix of Lone Ranger’s “Jah A Me Saviour” differs from the King Kong piece, which is a good thing as it adds to the appeal of this release. Lone Ranger, whose influence on a whole generation deejays was immeasurable back in the day, shows that he’s still able to deliver the goods when given the right riddim. And thus “Jah A Me Saviour” is a joy to listen to. On the other side of this 12″ single, there’s something to fulljoy for the dub heads as it features two worthy dub outings of the riddim played by the Lone Ark Riddim Force.