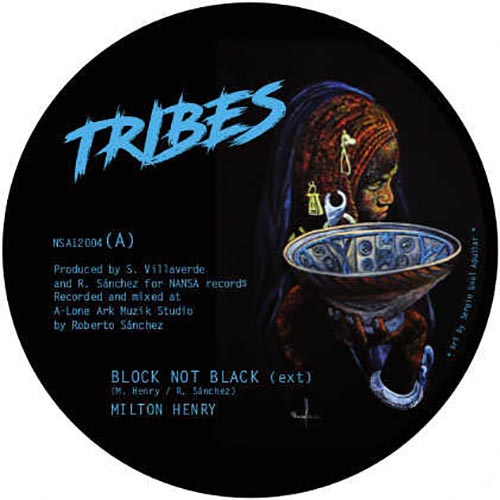 Nansa Records has put out a brand new roots reggae 12″ vinyl release on its new label called Tribes. The platter includes efforts from veteran singer Milton Henry, Spanish vocalist/producer Santiago Villaverde better known as Shanti Yalah and A-Lone musician Reuben Telford. The tough rub a dub riddim featured here might sound familiar to the ears as it was first used for “Dem A Come” by The Viceroys and I-Man Cruz’s “Nuff A Dem”, released on 12″ vinyl in 2017. These tunes were, just like the new ones, produced by Santiago Villaverde and Roberto Sánchez for Nansa Records.

In 2013, after a very long hiatus, Milton Henry made a welcome comeback with the Roberto Sánchez produced Showcase album entitled “Branches And Leaves”, a great set that recaptured the 1970s Greenwhich Farm sound, known from releases on Bertram Brown’s Freedom Sounds label. And now the singer, whose unique vocal delivery commands attention, returns with “Block Not Black”. The latter, an absolutely gorgeous social commentary with great lyrics and wonderful horns, has been extended with the dub version. On the flipside sweet-voiced Shanti Yalah does a good job with the nice conscious piece “Healing”, while Reuben Telford treats the listener to “Zarcea”, a melodica instrumental which wholly delights.

Get it before it’s gone!