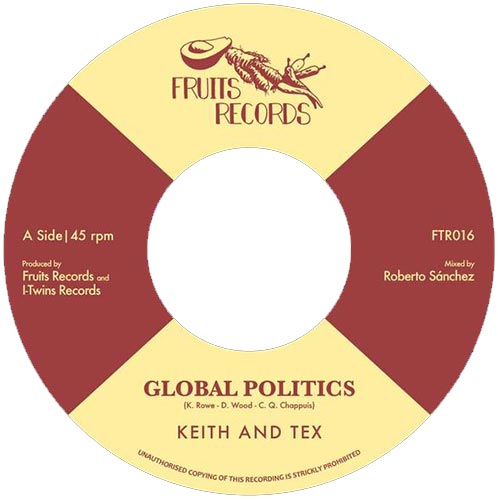 Keith & Tex are the legendary Jamaican Rocksteady duo of Keith Rowe and Phillip Texas Dixon, best known for a series of singles for producer Derrick Harriott in the late 1960s, including their 1967 hit “Stop That Train” (a cover of The Spanishtonians’ Ska version), “Tonight”, “This Is My Song”, “Don’t Look Back” (a cover of The Temptations’ song), and “Let Me Be the One”. After having reunited in the late ’90s and touring again in 2013, which also brought them to Europe, they teamed up with esteemed Spanish producer Roberto Sánchez for whom they recorded the 2017 released completely Rocksteady album “Same Old Story”. The latter proved that Keith & Tex were still on top of the Rocksteady scene.

In summer 2017, the Rocksteady icons met Swiss band Najavibes and teamed up with the crew to record a new original song called “Global Politics” on a riddim from The I-Twins. The latter, a duo from Geneva, Switzerland, appear on side B with “I Take The Risk”, performed over the same riddim track. Both tunes stay true to the Rocksteady essence and could very well have been recorded and issued back in the days. Vocally Keith & Tex still sound great after all those years and also lyrically their reality tune about the current US politics is absolutely worth hearing. And although The I-Twins also come up with a good tune, their effort doesn’t come near the class of the Keith & Tex piece.

This single will delight collectors of the sixties sound!

Available on regular black wax 7” vinyl and on a beautiful limited edition with handmade screen printed and numbered sleeves including translucent yellow record (only 90 copies!).