Kenny Knots – Hard Work / Dixie Peach – What Have You Done 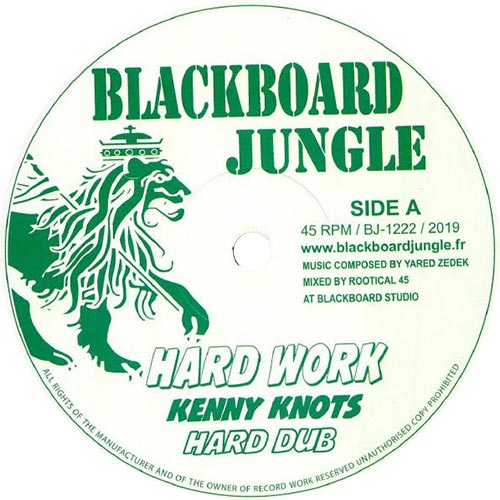 “Watch How The People Dancing” was a dancehall staple for UK veteran Kenny Knots way back in the mid-’80s on the revered North-East London Soundsystem’s label, Unity Sounds. Produced by Ribs aka Robert Fearon, this early UK digital bomb was as important to the sound of modern day Reggae as King Jammy’s influential “Sleng Teng”. Since then Kenny Knots has been flying the flag for UK Reggae and has worked with some of the best record labels, soundsystems and producers worldwide.

Dixie Peach is another UK artist who emerged in the ’80s. In his teens he got involved in music as a MC and selector with Young Lion Sound and eventually built his own sound system with his brother and friends called Killerwatt Sound,and produced a ‘special’ track for the sound called “Pure Worries”. A producer by the name of Jah Tubby’s from East London heard the track and released the track on 7″ vinyl in 1984. This then started the ball rolling for Dixie Peach, as it was not long before he had hits like “Spin Spin”, “Slaughter”, “Tonight Is The Night”, “Ragga Muffin” and “Rambo”.

Both artists are featured on this 12″ vinyl, bringing their own cut over an awesome uptempo riddim created by French musician, producer and label owner Yared Zedek. Versatile deejay/singer Kenny Knots comes up with thoughtful lyrics in “Hard Work”, a boom tune tailor-made for rootical Sound Systems. It’s followed by the entertaining “Hard Dub”, which keeps the vibes flowing throughout. On the other side Dixie Peach, who is blessed with a very distinctive voice, comes up with “What Have You Done”, a pure roots tune in which he praises the Most High, who never will let us down, even if the Babylon system is causing so much problems today. It’s the power of Jah Rastafari that can give the people strength to overcome these problems. Dixie Peach’s vocal is followed by two nice dub versions.

All tracks are produced by Blackboard Jungle and mixed by MC Oliva aka Rootikal 45.