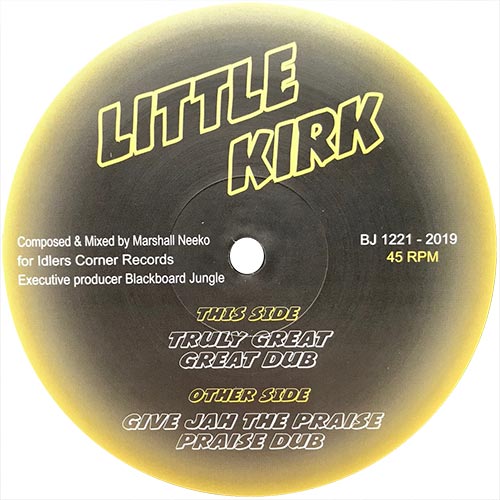 Blackboard Jungle, from Rouen, France, began in 1994 with a reggae radio channel in Normandy and started their sound system in 1999. Blackboard Jungle, the rootical warrior sound system, became one of the biggest sounds in France. They regularly perform with Jah Shaka, King Shiloh and other titans in sound system culture. Today, Blackboard is a sound system, a studio, a label and a crew: Olivier (MC, singer), Nico (selector, operator) and Guillaume (official boxman). In 2007, their first production – a 12″ vinyl platter – inaugurated the Blackboard Jungle label: three artists and one dub on the “Revelation” riddim, which was composed, recorded and mixed by Sandy. The latter is featured on the vinyl disc with his first recording “Revelation song”. Also featured on this release is Vivian Jones with “As A Rastaman”, and Afrikan Simba with “Civilization”, a song with militant and committed lyrics for Africa of tomorrow.

Fast forward to 2019, which sees the Blackboard Jungle label releasing three noteworthy 12″ singles in a short period of time. One of them is the result of a collaboration with French producer, engineer and riddim maker Marshall Neeko and contains four tracks taken from Little Kirk’s mid-2018 released “Truly Great EP”. Two of that EP’s highlights plus their dub counterparts were rightfully chosen to be included on this 12″. Real nice sounding original digi roots riddims underpin the vocal & lyrical efforts of Little Kirk and get Marshall Neeko’s fine dub treatment. Vocally still in good shape, Little Kirk makes a real good impression with two great praising songs of which “Truly Great” is the slightly better one. The accompanying dub versions are both well worth a listen and the icing on the cake.

Without any doubt a great hear when played loud on a well setup sound system.