Love Shuttle – Coming To You

Love Shuttle – Coming To You 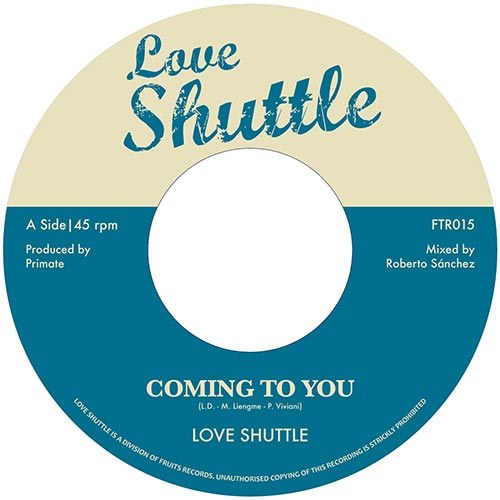 Having treated reggae fans to noteworthy releases in the past few years, it’s clear by now that the city of Geneva, Switzerland has become a comfortable breeding ground for good quality reggae. Fruits Reecords is one of the Geneva-based label that draw attention with a number of 7″ and 12″ vinyl releases, and albums from I Kong, The Inspirators, The I-Twins and most recently Oku Onuora. And now they have released two 7″ singles simultaneously; Keith & Tex’s “Global Politics with on the flipside “I Take The Risk” by The I-Twins, and Love Shuttle’s “Love Shuttle” with on the other side Gee Sugar’s “Lovers Boulevards”.

It’s a bit confusing when you exactly want to know who Love Shuttle is as the press sheet states:
“Love Shuttle is a group. But first it’s a song. And then a label. Love Shuttle is everything. And nothing. A mysterious mirage”. The group itself says it is formed from the encounter of legendary Jamaican drummer Leroy “Horsemouth” Wallace and three youths from Switzerland.

Anyway, Love Shuttle’s single called “Coming To You”, takes the listener back to the late 1970s when the UK lovers rock genre flourished and female artists such as Louisa Marks, Ginger Williams, Janet Kay, Carroll Thompson, Cassandra and Joy Mack to name a few had hits in the reggae charts. “Coming To You” has a wonderful sounding riddim laid by some of the finest studio musicians, with on top the vocals of a female singer. Those who love to listen to instrumentals, will surely appreciate en fulljoy the flipside, feauring the awesome organ version “Lovers Boulevard” by Gee Sugar, one of the greatest keyboard players from Paris, France.

All in all well worth checking!

Available on regular black wax 7” vinyl and on a beautiful limited edition with handmade screen printed and numbered sleeves including translucent yellow record (only 65 copies!)