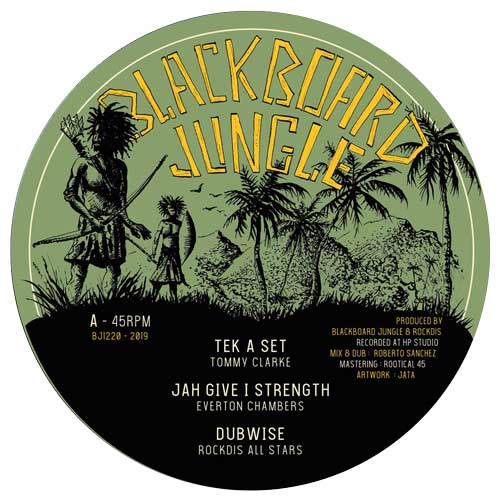 Blackboard Jungle is a sound system and collective based in Rouen, France. Founded in 1994 by means of starting a weekly radio show, aimed at spreading Jamaican vibes, culture and music. After some 4 years they started building their own sound system, following the example of major UK sounds such as Jah Shaka, Aba Shanti and Jah Tubby’s. Their name and fame rapidly conquered France and Europe. One of the highlights was taking part in the London University of Dub events. Nowadays Black Board Jungle is a sound system, label, studio and the crew of Olivier (MC, singer), Nico (selector, operator) en Guillaume (boxman). Their goal is to spread the universal reggae vibes with messages of love, peace and brotherhood.

On the turntable is their 12 inch Tommy Clarke – Tek A Set backed with Donovan Kingjay – Signs. The six track single has been on repeated rewind since we received it. Side A carries three tunes on one riddim, mixed by Roberto Sanchez, while side b comes also with three tunes, but across another riddim and mixed by West Finga.

Tommy Clarke aka Trevor Clarke, started his musical career in the early 1980s, but kept a low profile. He opens firmly with Tek A Set. A tune that evokes pleasant memories of roots reggae tunes from way back when. Across a pounding steppers riddim he delivers his powerful message. Everton Chambers surfaced in the mid 1980s with nuff tunes for the Parish label from Jamaican producer Edgar White. He stays on par with Jah Give I Strength, a song of excellence with importance. The dub comes with gentle drum, bass and guitar reworkings.

Switching to side b we come across Donovan Kingjay. Born in London, singer Donovan Kingjay spent his formative years in Hanover JA, before returning to the UK to finish his schooling and to begin his musical education. In 2013 he released his album Higher Meditation. He opens with the majestic Signs. The riddim is a few steps slower, but surely creeps pon you! This tune is an example of roots reggae music we want to hear more of in 2019. A tune to embrace for years to come. John Cereal is completely unknown to us. But his herb anthem Herbs grabs your attention fi sure. Here too we welcome an adventurous & spacy dub.