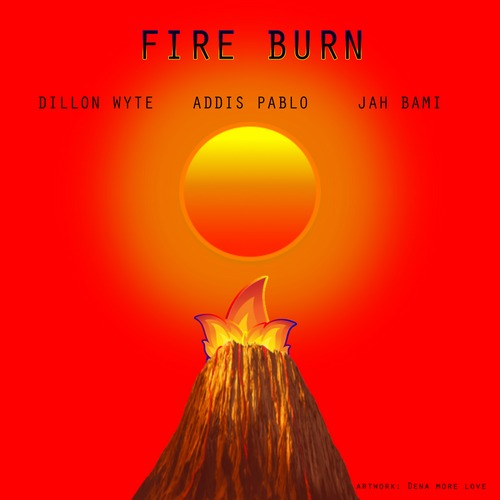 Dillon Wyte is a young multi instrumentalist musician born in Arkansas USA. He’s influenced by a variety of musical styles such as country music, reggae, dub, folk and rock. This natural gifted artist displays extensive musical knowledge of outstanding quality. He has released the albums “Power to Slay Giants” and “Dreamers Rock”, which display his talents as a singer, musician, composer and songwriter.

During his recent visit to Jamaica he recorded several tunes. One of those songs is a collab with melodica player Addis Pablo and Jah Bami on a track called “Fire Burn”. Jah Bami aka Damian Marvin Walters hails from Trinidad and Tobago, he’s a singer and multi instrumentalist who can look back on a successful career.

The mid-tempo reggae track is a hypnotizing piece that has a Black Ark-esque feel to it, mystical and floating down from the mists of Mt. Zion. In the first two verses Dillon and Jah Bami look upon the world, and point out the negativity that ruins the hearts and minds of the people. Dillon remembers the well known story of Moses when Jah spoke to him. Both call upon the people to get together and throw down Babylon. Addis Pablo steps up for the instrumental part. Across a landscape of echo and delay he manages to create a spiritual atmosphere with his melodica, it’s almost surreal.