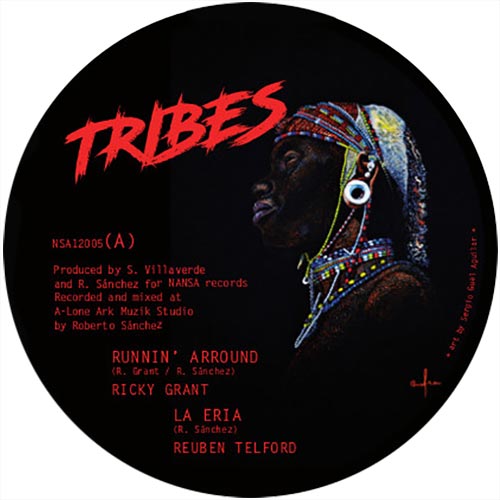 The name of Ricardo Grant aka Ricky Grant first appeared towards the end of the 1960s, when he was a member of The Afrotones with whom he recorded songs such as “All For One” and “If I’m In A Corner” for producer Sonia Pottinger. Around 1969 the vocal group recorded “Freedom Sound” and “Things I Love” for Harry J. Later Ricky Grant recorded “Freedom Sounds” and “All For One” again, this time solo with Augustus Pablo as producer. When Delano Stewart had left the Gaylads in 1969, Ricky Grant replaced him on several occassions for a brief period of time. After that, little was heard from the singer, although he was mentioned on various LP covers during the period 1974-1976, however now as a backing vocalist or as a drummer.

At the end of the 1970s, when Augustus Pablo more and more started to act as a talent scout/producer for his own Rockers International label, Ricky Grant also joined this group of talents which included the great Hugh Mundell, TeTrack, Norris Reid, Delroy Williams and others. This collaboration with Pablo resulted in Ricky Grant’s first LP entitled “I Love Jah Rastafari”, which was recorded around 1978-79. In 1979 Ricky Grant and Roman Stewart recorded the song “Peace Talk” which appeared as 12″ single on the Corona label of producer Byron Whitely from New York. Also in 1979 his second LP “Poverty People” was released in Jamaica, without a sleeve and on the Hungry Town label. The album included songs like “I Chose Far I” , “All For One”, “Who Art Babylon” and “Poverty People”, his second classic (“Freedom Sounds” being his first) and perhaps his best song. A re-release on the Island In The Sun label appeared in 1981.

After a long hiatus, Ricky Grant – now living in New York – returned with new releases such as the 2013 released 10-track album “Ricky Grant at Roots Vibes” and singles like “Pure In Heart” (Jah Tubbys, 2013), “Ting A Ling” (Rocking Time Records, 2014), “Mount Zion Step” (Operation Records, 2014), and “Penitentiary Life” (TruthTown Records, 2016). Ricky Grant’s brand new song, the great “Runnin’ Around” – produced by Santiago Villaverde and Roberto Sánchez – is now released on 12″ vinyl by Nansa Records on its new label called Tribes, on which also Milton Henry’s gorgeous “Block Not Black” was released earlier this year. Backed by a superb riddim, Ricky Grant delivers a totally satisfying effort. Reuben Telford’s melodica play adds a nice touch to the riddim and can be fulljoyed in the second part of the track, where the sound of the melodica comes to the fore in the Pablo-esque “La Eria”. Turning over to Side B, where the versatile Roberto Sánchez takes on the vocal duties. With “Be Thankful”, he shows that he’s a real fine vocalist too.