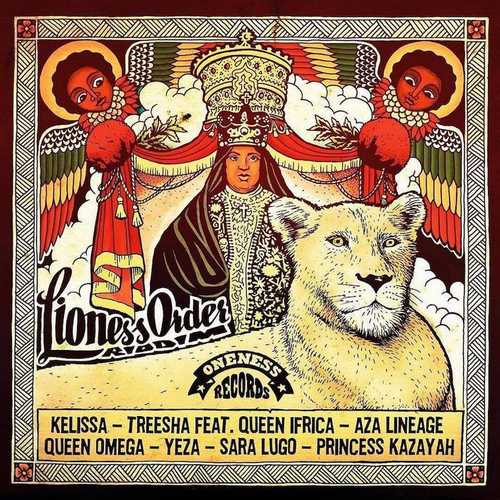 The earlier this year released all female reggae album “Queens in The Arena – Kemet Riddim” by Nico Star Music, is now followed by a next ‘one riddim’ project featuring a fine line-up of female vocalists. Produced and released by one of the most reliable imprints when it comes to quality reggae music, the Germany based Oneness Records, the compilation called “Lioness Order” features a roster of established and emerging songstresses from Kingston, Jamaica to Nairobi, Kenya. Backed by a heavy roots rock riddim, the artists who have voiced a cut for the riddim empower women in reggae music.

The “Lioness Order” takes off with its title track done by the dreadlocked Kelissa, a Jamaican songbird who was raised in the inspirational hills of St. Andrew. Blessed with a distinctly melodious and fiery delivery, she makes her cut really nice to listen to. Queen Omega’s powerful sung “Never Trouble No One”, a provocative ode to self-mastery, belongs to the highlights of this compilation. Next comes Aza Lineage, one of the newest Jamaican artists on the scene. She delivers the real fine sounding “Kill Them With A Sound”, showing she’s an artist to watch for in the near future. Since she debuted in 2009 with a self titled EP, the incomparable Sara Lugo has attracted attention with some noteworthy albums. The sweet soulful voiced singer makes a good impression with the solid “Woman On A Mission”, telling that she refuses to be defined or confined.

Then there’s the outstanding “Fyah Daughter”, which sees Kenyan singer Treesha combining her powerhouse vocals with reggae stalwart Queen Ifrica. Their combination tune is a warning-shot to anyone who might take the feminine force lightly. Yeza, another emerging artist, comes up with a very satistfying and convincing piece titled “Rebel Empress”, one that – just like “Fyah Daughter” – goes on repeat. Before the straight instrumental version of the riddim track closes out the “Lioness Order Riddim” compilation, the angelic voice and conscious lyrics of Princess Kazayah can be fulljoyed while listening to her decent contribution called “Thunder Clap”.

All in all a nice Project!