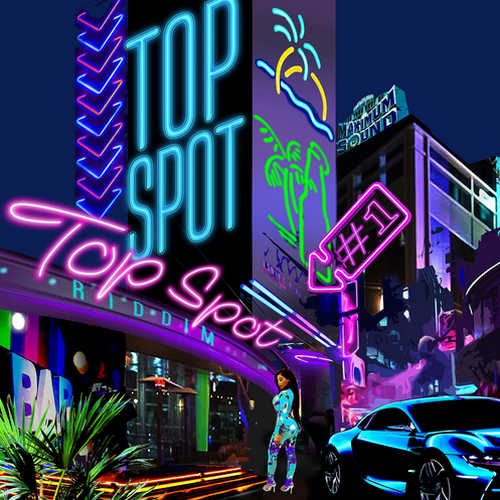 Since it emerged on the scene in 1993, the mighty Maximum Sound imprint has definitely done great things. The esteemed UK-based label stands for quality reggae and dancehall music and throughout its 26 years of existence has hardly ever delivered disappointing projects. 2019 sees Frenchie’s Maximum Sound putting out another noteworthy modern dancehall project, the truly big “Top Spot Riddim”. The latter, a very infectious and appealing danceable backdrop, is created by producer Frenchie himself in collaboration with Jamaican hit maker Christopher ‘Longman’ Birch, who also took care of the mixing process at his Birchhill Studios in Kingston, Jamaica.

Featured here are the label’s favourites such as Romain Virgo, Christopher Martin, Busy Signal and Mr. Vegas, all four popular top artists who have scored several big hits, and four lesser known names of whom D Major is probably the best known as he has quite a few minor hits under his belt. A collaborative effort by Romain Virgo & Christopher Martin isn’t an exclusive affair as these two crooners have been successful with their 2017 released single “Leave People Business”. With the opening track, “Glow”, they once again show that their voices blend very well together.

With hit after hit, Busy Signal has established his talent and staying power in the industry. Here he delivers the very fine lover’s piece “Perfect Spot”, which shows that he’s an artist who has the ability to excel no matter what riddim he has to voice. Every time artist Mr. Vegas and producer Frenchie team up they prove to be a winning duo an thus it’s not really surprising that “Fed Up” is another winner. Of the remaining tracks it are in particular J-Lil’s “Hero” and The Kemist’s “Last Man Standing” that make a serious impression and are worth hearing over and over again.