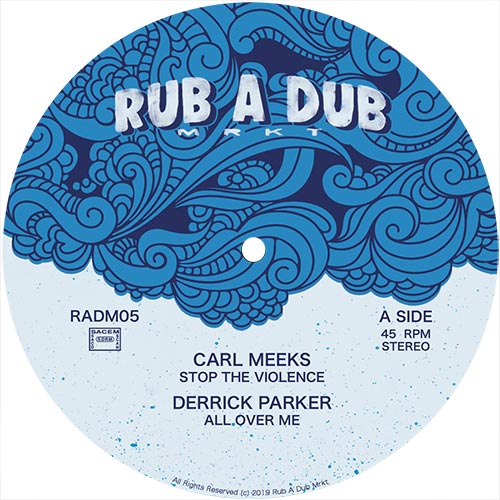 To serve the needs of sound system selectors and vinyl addicts, French musician/producer Kiko has released a brand new heavyweight 12″ maxi vinyl (in limited edition) on his own Rub A Dub Mrkt label. Featured are 4 cuts of the riddim originally created for Carl Meeks’ tune “Stop The Violence”, which appeared on his earlier this year in digital format released worthwhile album entitled “The Revolutionary Journey”.

The riddim of “Stop The Violence” perfectly fits the artist who emerged in the second half of the ’80s – the Ragga era – when riddims built with computerized keyboards were the order of the day. The underrated Carl Meeks has an appealing ‘singjay’ style with a distinctive falsetto and a unique slur, which makes his strong message tune a real joy to listen to.

While working on the Carl Meeks album, Kiko got Derrick Parker voicing a tune on the “Stop The Violence” riddim. The wicked dancehall singer, who just like Carl Meeks started to make a name for himself in the 1980s, transcends his cut for the riddim called “All Over Me” with his outstanding silky voice.

Born and raised in Waterhouse, Little Kirk aka Kirk Davis, originally came to the fore in the early ’80s after winning an area talent contest which led to working with producer Patrick Roberts of the Shocking Vibes label. The older brother of Beenie Man posesses a richly textured voice, which has graced numerous singles and about 8 full length albums. Here he showcases his incredible vocal gifts on the previously unreleased conscious piece “More Love”. Also previously unreleased is the gorgeous dub version of that cut.

Recommended for all fans of the Ragga era.