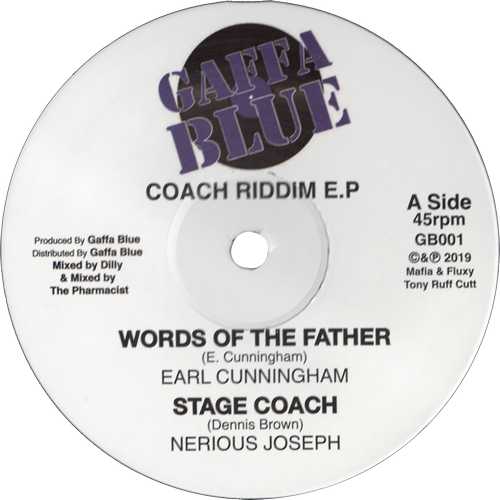 Gaffa Blue, London based owner of Nasty Rockers Sound System and one of the most versatile selectors, recently founded a record label with the same name. His first release is a 12inch with four tracks on the Coach riddim. The original lick comes from Earl Cunningham who recorded it for Dennis Brown in 1978. The revisited riddim sounds superb, no wonder with musicians such as Mafia & Fluxy and Tony RuffCutt.

Reggae veteran Earl Cunningham, born 1959 in eastern Kingston, Jamaica, recorded his first songs for producer Roy Francis but were never released. Teaming up with reggae star Dennis Brown resulted in the release of the aforementioned Words Of The Father. It proved to be a classic roots reggae anthem. His 2019 reworking of his own song shines without any doubt, the power and conviction are still there!

Since Nerious Joseph emerged onto the UK Reggae scene in 1979 with the single Roots & Culture, he has gone from strength to strength. With quality albums under his belt for Fashion Records, Charm and Ruff Cutt productions he’s a solid consistent artist. Nerious doesn’t fail on this one. His exquisite lick of the riddim covers Dennis Brown’s Stage Coach. Pure joy from start to finish.

Singjay Chukkie Star first came to attention when he formed his Echo Tone Hi Fi sound system. The 1990s saw him recording for UK’s top producers with considerable success. He is still active recording and performing. He certainly knows how to ride the riddim, with his recognizable style he delivers 100%.

Mafia & Fluxy, UK’s riddim twins, and IGAP aka Gappy Crucial round off the album with the instrumental version. It’s an appealing tune with Gappy Crucial producing scorching vibes on his kette drum!