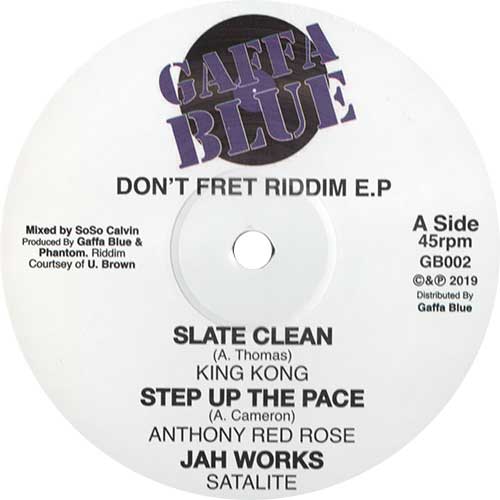 Gaffa Blue, London based owner of Nasty Rockers Sound System and one of the most versatile selectors, recently founded a record label with the same name. His first output was the Coach Riddim.
Next comes a 12inch with no less than six tracks on the Don’t Fret riddim. He co-produced this set with Phantom from King Tubby’s in Jamaica. We have to go back to 1983 for its origins. Deejay U Brown produced George Nooks with Fret Not Yourself, his take on the Rocking Time riddim. Fast forward to 2019…Gaffa Blue used the riddim for this 12inch and the result is marvelous!

First on the riddim is dancehall veteran King Kong. He scored several hits in the 1980s and 1990s, and released some good albums as well. Last year’s album Repatriation proves he still is a reliable source of top-quality music. His tune Slate Clean is pure joy and shows King Kong’s excellency inna Burning Spear fashion: “open the door, let the rasta man in”. Boom!!
Anthony Red Rose, probably best known for his King Tubby produced anthem Tempo steps up with grace for his tune Step Up The Pace. It’s a powerful take on this riddim, a standout selection with rockers vibrations!
Satalite came to prominence in the mid 1990s. His vocal style evokes memories of the late great Garnett Silk. His praising tune Jah Works makes us longing for more Satalite!

Style change. Born and raised in North-West London, Baby Boom is a versatile deejay with a penchant for reggae, dancehall, and hip-hop. Here he delivers a serious soundbwoy tune. His deep gravelly voice matches the vibe of the riddim inna masterclass flow.
YT is a top deejay who comes from Ipswich, and recorded for himself, Curtis Lynch and the Scotch Bonnet imprint, to name but a few. His soundbwoy lick of the riddim is impeccable, a real sound system treat with a delivery that is totally his own. Fyah Bun!
Patrick Aba Original closes with Don’t Ramp Wid It. His instrumental/dub tune delights us and it gives a new dimension to the riddim! Nuff Said and now play the record