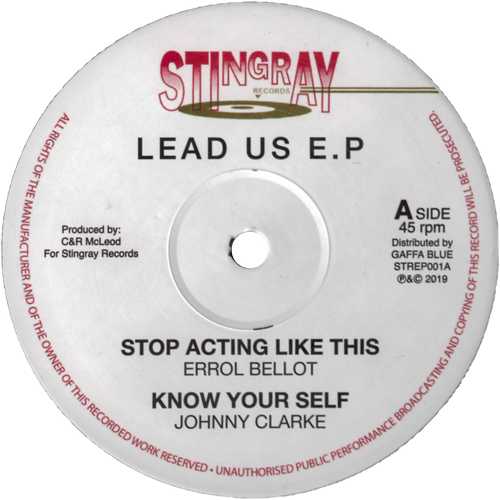 West London based Stingray Records, active since the early 1990s, is known for producing unique ‘Yard Style’ mixing technique outside Jamaica. The characteristic sound on Stingray’s production is fairly traditional and filled with classic 1970s reggae feel, but built with all the advantages of modern studio technology.

Their recent 12inch is an impeccable reworking of the classic 1974 tune Lead Us Father by The African Brothers, a group formed in 1969 by three Kingston teenagers, Lincoln “Sugar” Minott, Winston “Tony Tuff” Morris, and Derrick “Bubbles” Howard. The riddim is carefully reconstructed by Grammy Award winning producer and musician Paul ‘Jazzwad’ Yebua and Tony ‘Ruffcutt’ Philips.

First tune comes from Errol Bellot. He entered the reggae scene in 1981 with the classic UK roots reggae tune Babylon. He recorded some more tunes and joined the North London sound Unity Sound. He has worked with several sounds, artists and producers and still is active. Errol knows how to ride the riddim in good fashion. He calls us to “stop acting like this…don’t get caught in the system…it costs nothing to live right..” Stop Acting Like This is a pure anthem with sense of purpose.

Next comes Johnny Clarke. In the second half of the ’70s, he was one of the most popular singers in the Jamaican dancehalls. Alongside Dennis Brown and Gregory Isaacs he ruled the Jamaican music scene. His long lasting career took him to the UK where he continued his successful career. With Know Your Self, Johnny Clarke rides the riddim with rootical vibes, across a sparse bass and drum backdrop. “Live up for thruths and rights…look in yourself, know yourself..”

The third vocal cut is by Horace Martin. This veteran reggae artist has been at the base of the reggae movement since the early seventies. He has been making records consistently over the years. He was awarded the singer of the year in 1995 by the Canadian Reggae Music Awards. His appealing tune Johnny Brown is a powerful anti-gun message. “Listen Johnny Brown, don’t take your Magnum to town…”. Horace truly shines on this piece!

Finally there’s the dub, without doubt on par with the vocal cuts, and adventurous as one might expect from these masterclass musicians.