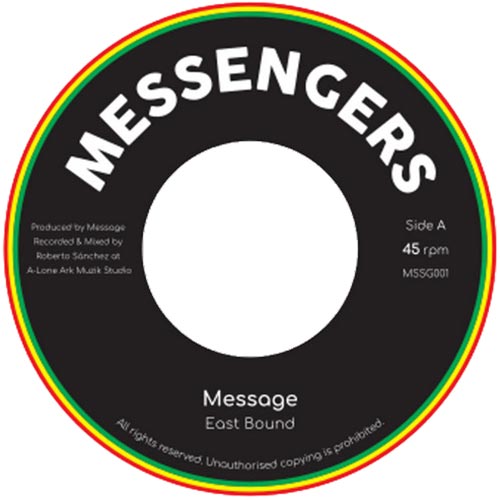 Wether the references to Augustus Pablo were done on purpose or not, it’s at least striking… First there’s the choice of the band’s name, Message, which might refer to one of Pablo’s own record labels. The title of the instrumental piece with the melodica as lead instrument incorporates the word ‘East’, which could be a reference to Pablo’s meditative and mournful ‘Far East’ sound and titles of Pablo tunes like “East Of The River Nile”, “Far East”, “East Man Sound”, “Rockers Come East” and ‘East Wind”.

Message is a new band formed by a group of Roots Reggae lovers in November 2017 in Bilbao, Spain, which is currently consolidated by musicians from Cantabria and Bizkala. At the moment the band consists of the esteemed Roberto Sánchez (drums), Gorka Sánchez (bass), Roberto Bartolomé (guitar), Gorka Fernández (piano, organ & trombone), Bass Lee (piano & melodica) and the mighty Dub Ambassah (percussion). During live shows they are accompanied by their engineer Ibai Areitio. The band also has its own record label called Messengers. Message’s music is inspired by the crudest, overwhelming and comitted sounds of the golden age of Jamaica’s popular music and the most renowned Roots Reggae musicians, engineers and producers of the ’70s and early ’80s.

The band’s self-produced debut single (on 7″ vinyl) called “East Bound” has been recorded during a live session at A-lone Ark Muzik Studio, where it was mixed by the inescapable Roberto Sánchez. The latter also manipulated the knobs in order to create “East Bound Dub”, the worthwhile dub version on the flipside. The vibes are very nice and so is the expertly played riddim! To hear a well blown melodica over a thoroughly appealing riddim is simply candy for the ears and thus a joy to hear.

It’s really good to notice that the Message band is able to keep the Pablo melodica tradition going.