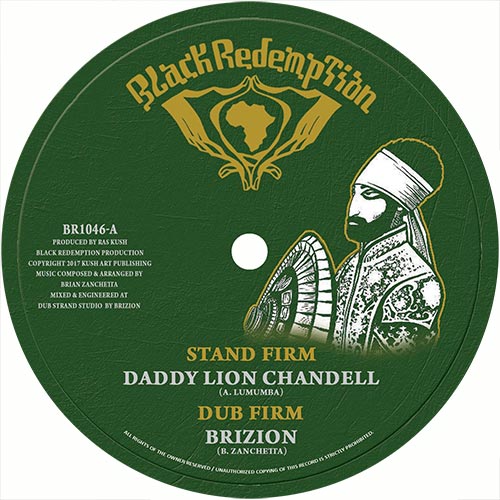 Started a few years ago by musical activist Ras Lion, Berlin-based production & promotion force Lion’s Den has constantly been moving forward on all aspects of delivering the finest in conscious music ever since – in the studio, on vinyl or at a dance. After having collaborated with the great Brooklyn-based Black Redemption imprint – a record label with a roots & dub focus, which is headed by Ras Kush – for the 2018 release of the 12″ vinyl platter “Back Away” by Haspar feat. Fikir Amlak, they continued working closely together as is expressed by the release of a fresh 10″ vinyl disc, which features two vocal cuts and their dub counterparts.

Side A features “Stand Firm” by Daddy Lion Chandell, a NYC-based accomplished reggae recording artist, writer, radio personality, sound selector for Roots Dynamic Sound Movement and the Black Moses Sound System, and since 2008 a member of The Meditations. Across a mesmerizing roots riddim composed by Brizion, Daddy Lion Chandell delivers a massive tune, that will surely have a serious impact on the hardcore roots fan when played by the selector of a custom-built roots sound system. It’s followed by Brizion’s “Dub Firm”, a heavyweight dub version with a killer bass sound and Daddy Lion Chandell’s vocals coming in and out of the mix.

The flipside features the counteraction of Sista Kaya. The latter, a German singer, producer and studio owner who’s known from roots dances and tunes on the Jah Vibes and Debtera labels, keeps the conscious vibes flowing with the solid “Call On Jah”. The addition of some nice guitar picking to the riddim track works very well as it perfectly fits the mood of Sista Kaya’s effort. The dub version by Brizion, again with vocal snippets in the mix, is a great hear from beginning to end.

Available online in various record shops and truly worth picking up!