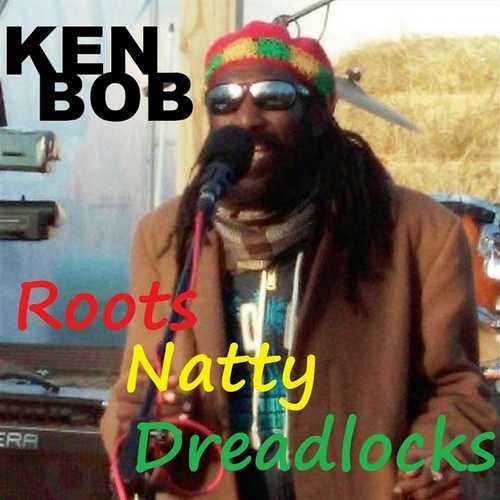 First and foremost, don’t judge Ken Bob’s EP by its horrible looking cover, because if you do so you really get it totally wrong! What you get when you give this “Roots Natty Dreadlocks EP” a spin are five fine examples of solid roots reggae music plus one matching lovers piece.

Veteran reggae singer/songwrtiter and producer Ken Bob was born and still resides in Spanish Town, St. Catherine, Jamaica. Inspired to sing by listening to music on the radio and singing the songs back to his friends, he started his public appearances back in the ’70s, appearing in local community events. Ken Bob has released 3 albums to date, his self-produced album “Reggae Rider” in 1989 with two tracks having Beres Hammond singing backup along with Ken Bob, a Tappa Zukie produced album titled “Heng On In Deh” in 1995 and in 2010 “Emergency” on the Asher label. In 2011, he released an EP with the late Jimmy Riley called “2 For 2”. Besides that he has released numerous singles over the years from 1979 onwards and was nominated for a Grammy in 2011 for a Sly & Robbie produced cover of Smokey Robinson and The Miracles’ “Tracks Of My Tears”.

Things gets started in a big way with the title track “Roots Natty Dreadlocks”, showing that after all those years Ken Bob vocally and lyrically still is in good shape. And thus it’s a real joy to listen to this great sounding opener, one of the EP’s bonafide highlights. And also the tracks that follow are something you definitely want to pay attention to, because they maintain the high quality level set by “Roots Natty Dreadlocks” throughout. Ken Bob’s ‘old skool’ approach combined with a modern sound works very well, in particular coming to the fore in probably the strongest tunes of all, “All Praises” and “Babylon Har Up”. His versatile vocal delivery comes to full expression in the last two tunes – “Live As One” and “Am Gonna”.

If you like to listen to good roots reggae music, there is something here which you will certainly enjoy!