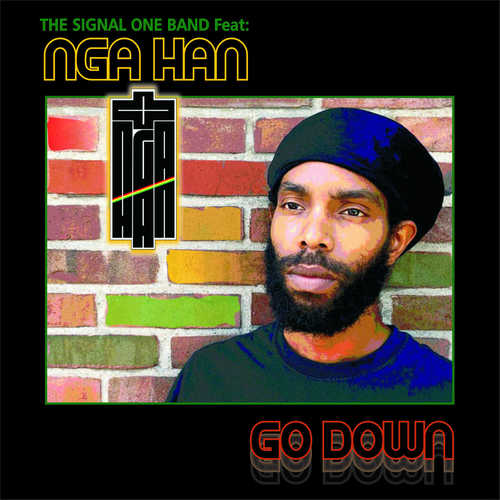 After having teamed up with producer/musician Kingston Echo from Antwerp, Belgium, which led to the release of the single “Way Out”, Jamaican singer/songwriter Nga (pronounced “Naga’) Han’s musical journey brought him to Amsterdam, the Netherlands, where he linked up with the in-house studio band at Earth Works Studio called The Signal One Band. The latter, consisting of UJ Maruanaya (drums & piano), Jan Kooper (piano) Kingsway (bass), Ras P (guitar & organ), and Carlos Xchematic (lead guitar), laid down the great sounding mesmerizing “Nuclear Riddim” (Jah Works) that perfectly fits Nga Han’s vocal style, which here comes a bit in the same vein as Vaughn Benjamin.

As already known from previous releases, Nga Han is a real good lyricist and this single affirms it once more. Backed by a powerful and attractive riddim with a truly wicked heavyweight bassline, “Go Down” – expertly mixed by UK roots veteran Dominic Forte aka Jah Rej – is a very compelling song full of consciousness, which is accompanied by an entirely satisfying dub version. All in all this is a basically flawless effort from an uprising artist and the Earth Works crew.

Worth checking out, especially for fans of V.I. Roots.